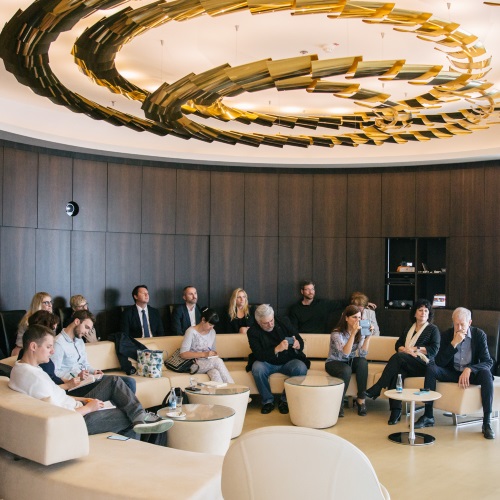 BTC City Ljubljana is becoming a unique global ecosystem, where innovative mindset flows and cooperation enable the transformation of business processes. The partnership between EDG and the ABC Accelerator speaks to the recognition and the success of the latter and at the same time represents a global potential for the business transformation of Slovenian companies. A significant role in this process is played by BTC City, which, due to its rich and diverse infrastructure, enables companies that are currently in the process of transformation to take advantage of its unique testing ground for various activities, such as automotive, banking, the internet of things, the power industry, e-commerce, etc.

A strong connection with Silicon Valley was formed last year, upon the opening of the subsidiary ABC Venture Gates in Munich and the subsidiary ABC Global Home Silicon Valley in the Mecca of entrepreneurship, Silicon Valley. With its successful activities and new strategic cooperation, the ABC Accelerator stretches far beyond the borders of Slovenia and Europe, and successfully affirms its position on the global business map, as well as introduces global trends to Slovenia.

Representatives of all three companies – ABC, EDG, and BTC – were thrilled and expressed mutual fondness in presenting their partnership and their vision for the future. They share a mindset which focuses on talented individuals and innovations that contribute to a better life – thus, they have decided to join forces. In this day and age, changing mindsets, reinventing products and services, and connecting with companies, industries, and start-ups is of the utmost significance. Companies that do not follow this trend will not have a bright future. The joining of forces of ABC, EDG, and BTC will only fortify the “Golden Gate Bridge” that connects Ljubljana and Silicon Valley.

“No one really knows what digitalisation will bring, so we are prepared for everything. We selected the best possible partners from both worlds. Our aim is to involve companies in the start-up world and connect them with the largest companies in the world,” said Dejan Roljič, founder and CEO of the ABC Accelerator. Urška Jež, co-founder and Executive Director of the ABC Accelerator in Ljubljana, presented in great detail the corporate programme to the representatives of companies already involved in the programme and to those who are looking to join it. It is a sophisticated programme that changes the mindset of companies on all levels and helps them form a long-term strategy, pursuant to future trends. The first workshops were already attended by the representatives of Lidl, Atlantic Group, Zavarovalnica Triglav, the BTC Company, and UniCredit.

After participating in the EDG programme, Lutz Junge, Director of innovations at Lufthansa, implemented several changes into the operations of the company, including an innovation incubator. Mr Junge was thrilled by the Accelerator and said that he has never seen anything quite like it. Its location in BTC City Ljubljana and the idea of “a city within a city” fascinated him, as he said: “It has set an example for many other cities. You simply have to visit and experience it.”

The cooperation among EDG, ABC, and BTC strives towards transferring a part of Silicon Valley to Ljubljana and consequently change the mindset and create modern business trends in Slovenia. With its unique consultancy approach to global corporations, EDG boasts an impressive list of clients, including Apple, Audi, Airbus, Lufthansa, Logitech, Panasonic, Intel, UniCredit, Johnson & Johnson, etc. They will bring their knowledge and experience onto the European market. With its 20-year-long tradition, EDG has become the biggest accelerator for corporations in the world.

“It is vital to include people in the process of innovation for a better common future. The ABC Accelerator and EDG are both leading actors in their respective fields of expertise, and as such complement the activities of the BTC Company perfectly. As EDG perceives trends, while start-ups see new opportunities. Together with the BTC Company, which possesses the perfect infrastructure for testing new products and services, we can have an impact on the world,” said Lisa Friedman, co-founder of EDG.

Only time will tell in which direction all the current changes will lead us. The aim of the joint strategic cooperation among ABC, EDG, and BTC is to present all the upcoming trends and directions that will have an impact on further global advancement. However, people, corporations, and innovations remain key.