2nd International Urban Beekeeping Symposium: interest in beekeeping is on the rise 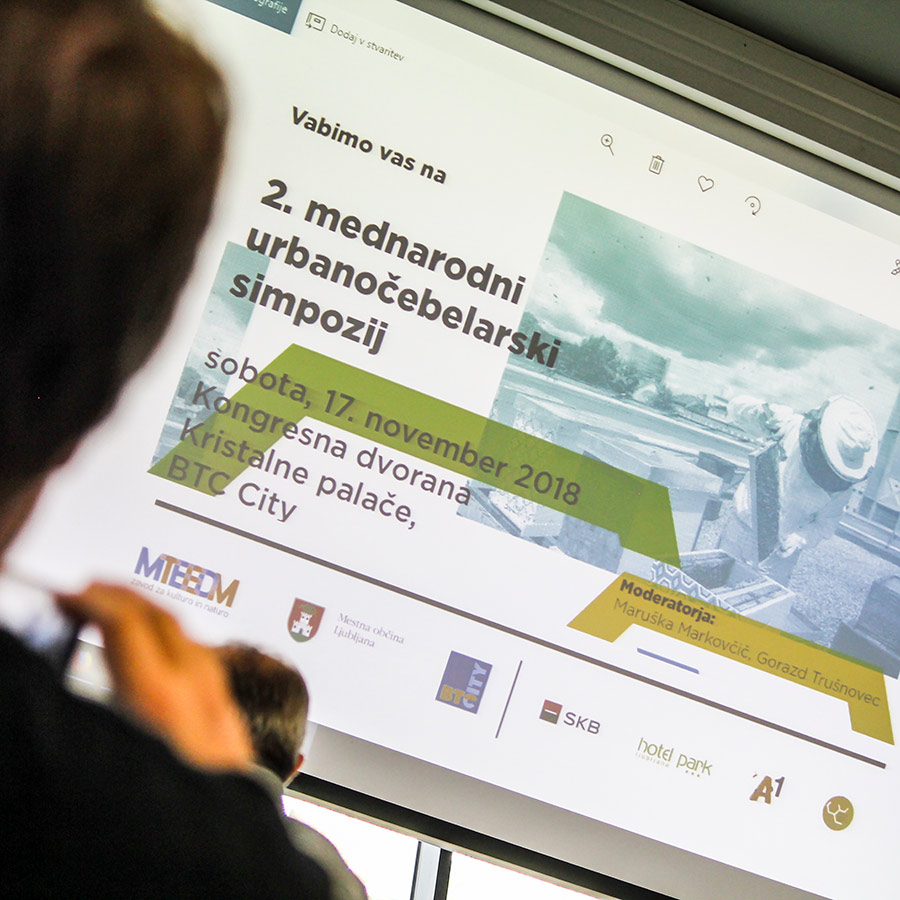 On Saturday, 17 November 2018, the Congress Hall of the Crystal Palace in BTC City Ljubljana hosted the 2nd International Urban Beekeeping Symposium. The all-day event brought together local and foreign lecturers who debated on the importance, trends, and challenges of urban beekeeping at home and abroad. The visitors of the Symposium all agreed that the event represents an important part of developing the urban beekeeping branch.

Following the success of last year’s Symposium, the institute for culture and nature Medtem, supported by the City Municipality of Ljubljana and the BTC Company, once again organised the International Urban Beekeeping Symposium. Experts, beekeepers, and beekeeping enthusiasts attended 13 lectures where they learned about the novelties of urban beekeeping in Ljubljana, its history, and facts about the beekeeping practice in Berlin, as well as across the world. They discussed the challenges urban beekeepers face, e.g. European foulbrood (bee decay) or the danger of herbicide glyphosate. Among other topics, they touched the field of beekeeping technologies and the necessary changes to the beekeeping legislation. Furthermore, they tried to look at beekeeping from a different, a bit unconventional perspective, i.e. with a philosophical approach regarding mankind, intelligence and planet Earth. The technical part of the event was concluded in the lobby, where Barbara Bajd’s book on the Carniolan honeybee “Kranjska sivka – Čebelica od kod in kam?” was presented along with the exhibit of technological innovation in the form of a corridor for the prevention of bee plundering by Damir Škraban, while the visitors had the opportunity to get the mentioned product for themselves, as well.

Gorazd Trušnovec, an urban beekeeper and the co-founder of the institute Medtem emphasised at the Symposium: “Urban beekeeping is becoming increasingly popular in the Slovenian capital, as well as in metropolises across the world. At the same time, in order for people and bees to coexist harmoniously, it demands more and more knowledge and attention, especially due to the increased density of beehive locations. We must understand that urban beekeeping can be addressed by some recommended specific approaches. Due to numerous positive responses to the last year’s 1st International Urban Beekeeping Symposium, we decided to repeat and expand the event. We incorporated a broader selection of topics, invited more lecturers and prepared a wider selection of starting points, which we believe to have raised interest among beekeeping experts, beekeepers, and the broader public.”

Supporters, lecturers, and visitors all agreed that such events are of great importance and that their realisation should be encouraged in order to achieve greater recognition of urban beekeeping and to guarantee greater success in the work of urban beekeepers.

Due to the year-long history of beekeeping in the Ljubljana area, one of the supporters of the event was the City Municipality of Ljubljana, which over the last few years started to encourage beekeeping with the intention to spread and develop beekeeping within the urban centre and the broader city area. Maruška Markovčič, senior advisor and the planner of The Bee Path project and the representative of the Department for Environmental Protection of the City Municipality of Ljubljana explained at the event: “Urban beekeeping is increasingly becoming a part of our everyday in the City Municipality of Ljubljana. It is an important constituent of our project The Bee path, the main goal of which is raising awareness of the locals about the importance of bees for our existence, for maintaining biodiversity, and for the environment. Connecting 34 partners, The Bee Path is based on synergy and represents a movement of like-minded individuals. With urban beekeeping, people come in touch with the nature around us again. The Symposium is a good example of spreading our perspectives on urban bees, regarding culture, nature, economy, and heritage. I believe this type of events and discussions should be even more frequent in the future.”

Beekeeping holds a special place also in the BTC Company. In the scope of the sustainability pillar Mission: Green, the company has been actively involved in improving the well-being of bees since 2014, as it realised the city of Ljubljana to be a suitable area for urban beekeeping due to having numerous green surfaces. Miha Mermal, Executive Director of Marketing and Mission Green in the BTC Company: “BTC has recognised the importance of urban beekeeping in Ljubljana, which we have helped form with our own urban apiary. We have been actively involved in increasing the well-being of bees in the scope of Mission: Green with our project Help the Bee: Flower up the City, which this year was included in Urban Nature Atlas, a collection of natural solutions in European cities. We strive to include the people of Ljubljana in the project in different ways, not forgetting children with whose help we, in 2018, transformed the Ameriška ulica Street in BTC City Ljubljana into an avenue of sunflowers. With events, such as the International Urban Beekeeping Symposium, we put into the foreground the professional aspect of urban beekeeping, which is very important for preserving the well-being of urban bees. Thus, I am very pleased to see the BTC Company becoming a sponsor of the Symposium.”