Artistic, rhythmic and acrobatic gymnasts present their goals for the 2019 season 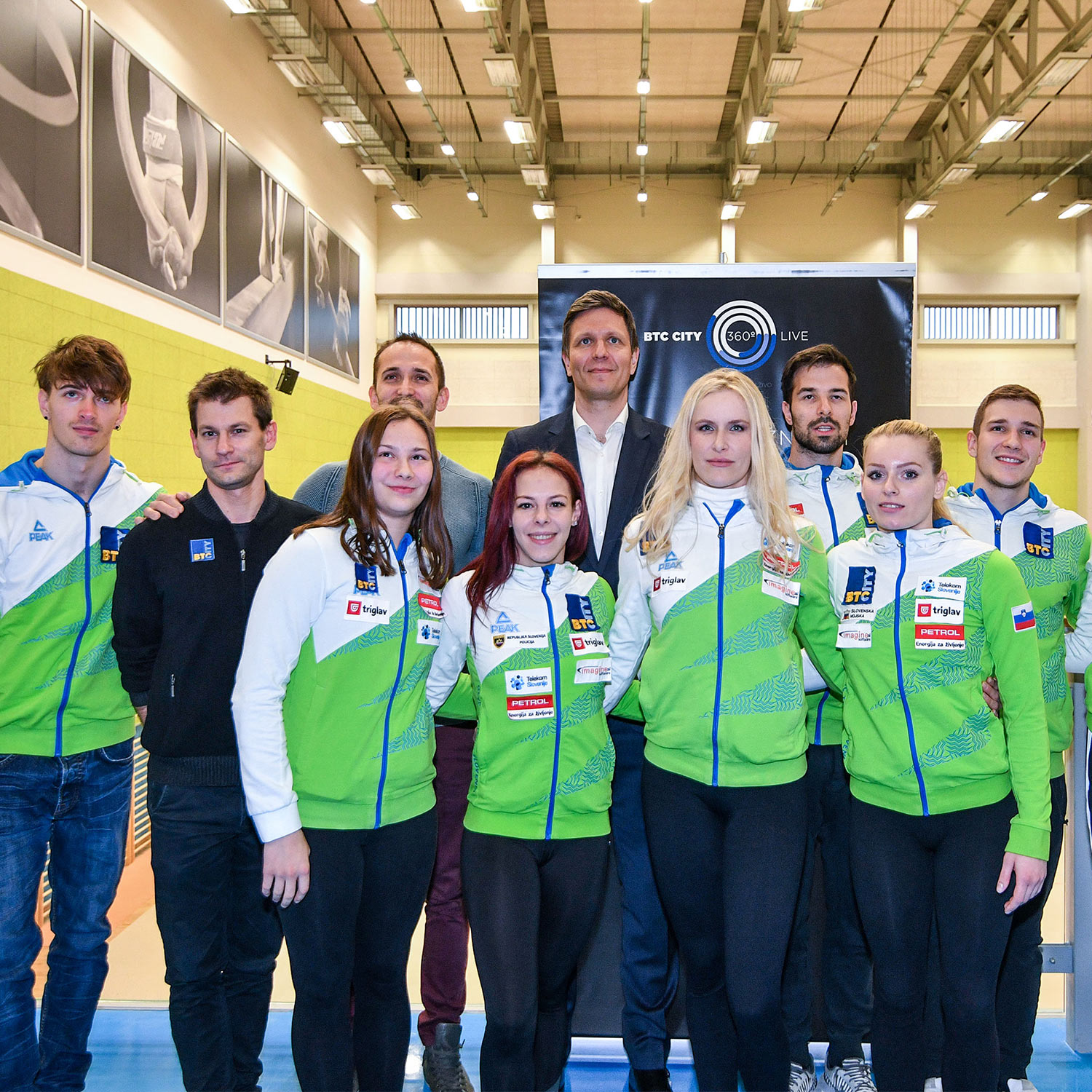 For Slovenian artistic, rhythmic and acrobatic gymnasts, 2019 is bound to be an extremely busy season full of diverse competitions. On Tuesday, the artistic gymnasts are travelling to Baku for the FIG World Cup, the rhythmic gymnasts have a weekend competition in Kiev, and the acrobats are about to compete in Amsterdam. As every year, their goals are ambitious.

“We wish for you to be successful, just as you have been until now,” said Damjan Kralj, President of the Slovenian Gymnastics Federation, in his message to the athletes at today’s press conference. On behalf of BTC, whose board member he is, he also extended their contracts with the company.

Artistic gymnasts already have one World Cup competition behind them, at which Slovenia was represented only by Rok Klavora and Tjaša Kysselef. On Tuesday’s trip to Baku, they will also be joined by Sašo Bertoncelj, Teja Belak and Adela Šajn.

After Baku, they will travel to Doha, which is to host a World Cup competition next week, and then to the European Championships in Poland. The season will peak in autumn with the World Championships in Germany, where it will be determined who will go to the Olympics and who will stay at home. But in the meantime, there is the FIG World Challenge Cup in Koper (Slovenia), as well as the European Games and the Universiade.

“The most important competitions will take place at the autumn World Championships, the main qualifying event for the 2020 Olympic Games. Before that, we have the European Championships in Szczecin in April. The European Championships will be our qualifying competition for the European Games in Minsk. The competitions are intertwining, and in between these major events we have different World Cup events. Business as usual, just like in the past years. In the summer, we will also compete at the Universiade. This season mostly depends on Sašo and Rok. If the season goes our way, we can expect a placement in the finals in their respective main disciplines. It all depends on the current form, the athletes’ health, and the overall progression of the season,” said men’s coach Sebastijan Piletič.

It will be quite some time before women’s coach Andrej Mavrič can count on Lucija Hribar, who had to undergo shoulder surgery due to an injury. Belak hasn’t trained for the past ten days because of health issues, and Kysselef and Šajn are also troubled by pain every once in a while.

“We have two goals. The main goal pertains to the World Championships, where we will try to repeat the success of the past couple of years. We had a Slovenian representative at the past three Olympic Games, and we also want to have one in Tokyo. One key to achieving this is competing well at World Cup events, which is why we will participate in all of them. Realistically speaking, though, the chances of us getting a ticket to the Olympics through World Cup competitions are slim, so we will also try to do that at the World Championships. The second goal is to repeat the success of the past couple of years, meaning, to have at least one, maybe two gymnasts in the European Championships finals. The performances at the European Championships will determine whether any one of them can compete at the European Games,” explained Mavrič.

The rhythmic gymnastics team will step into the new season younger, but without lowering their goals. “The group gymnastics team will gather valuable experience at this year’s major competitions. The national team has quite a gruelling year behind them because of the onset of Olympic qualifiers. We want our ticket. We have already started the season and are headed to Kiev this week. April marks the beginning of a series of World Cup competitions. We will conclude the spring part of the season with the European Championships. We want to place among the top 20. In July we have the Universiade, and in autumn the World Championships, where athletes will compete for tickets to the Olympics,” noted Lena Jakubovska, President of the Expert Committee for rhythmic gymnastics.

This year, more support will also be provided to acrobatic gymnasts, since large trampoline has become a new Olympic discipline. As explained by Piletič, who is also the President of the Expert Council of the Slovenian Gymnastics Federation, they will also commit to this discipline in the future. “It is a very serious and demanding discipline, which we have not paid enough attention to until now. With individual keen athletes, we slowly started to partake in competitions,” added Piletič.

“This year, we will compete at three or four events. The first one will take place already this weekend in Amsterdam, then there is one in Cottbus, and in autumn there are competitions in the Czech Republic and in Salzburg. Presumably, the ones competing will be juniors and cadets. They are our future hope. Our goals are modest. We would be happy with a placement in the top half, and once in a while we should also make the finals,” explained Jure Kern, a representative of the acrobatic gymnasts.

Artistic, rhythmic and acrobatic gymnasts present their goals for the 2019 seaso