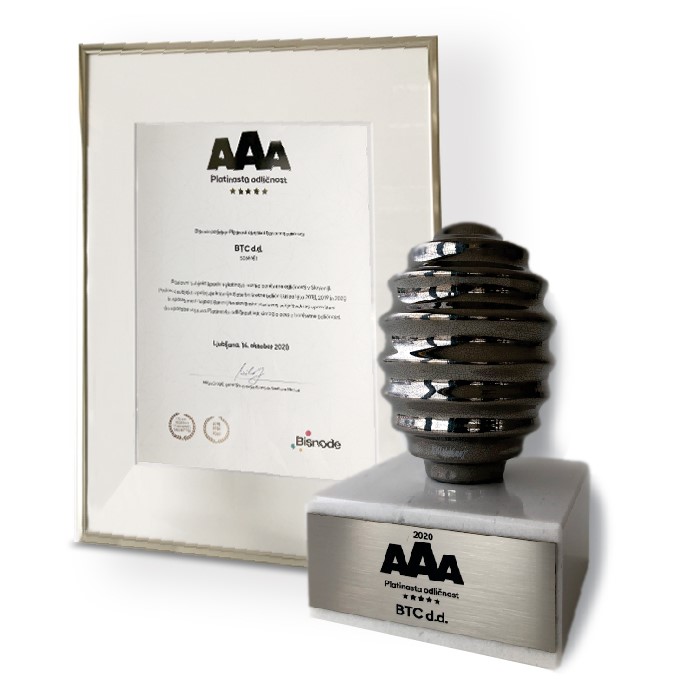 BTC has ranked among the 1.2% of companies that have received the AAA Platinum Creditworthiness Certificate of Excellence. Companies displaying platinum creditworthiness of excellence present the most reliable, credible and low-risk business entities in terms of cooperation with all business partners.

The Platinum Creditworthiness Certificate of Excellence is given to companies which have displayed the highest creditworthiness excellence, Gold AAA, for three consecutive years. The certificate is awarded by the Bisnode credit rating agency, which in 2019 for the first time narrowed down the selection of companies with platinum creditworthiness of excellence among all the economic entities that had received the Gold AAA. BTC was among the first companies that were awarded the highest award in Slovenia; winning the prestigious award again this year, the company has once more justified its position among the most successful companies in Slovenia.

The Platinum Creditworthiness of Excellence is based on financial statements and other dynamic indicators of the company and it anticipates above-average safe and successful business operations of the company in the coming twelve months. Thereby, BTC has positioned itself at the very top of Slovene economy and has reaffirmed its reliability in its relationship toward business partners – customers, buyers, suppliers, as well as insurance companies, banks and other business partners.