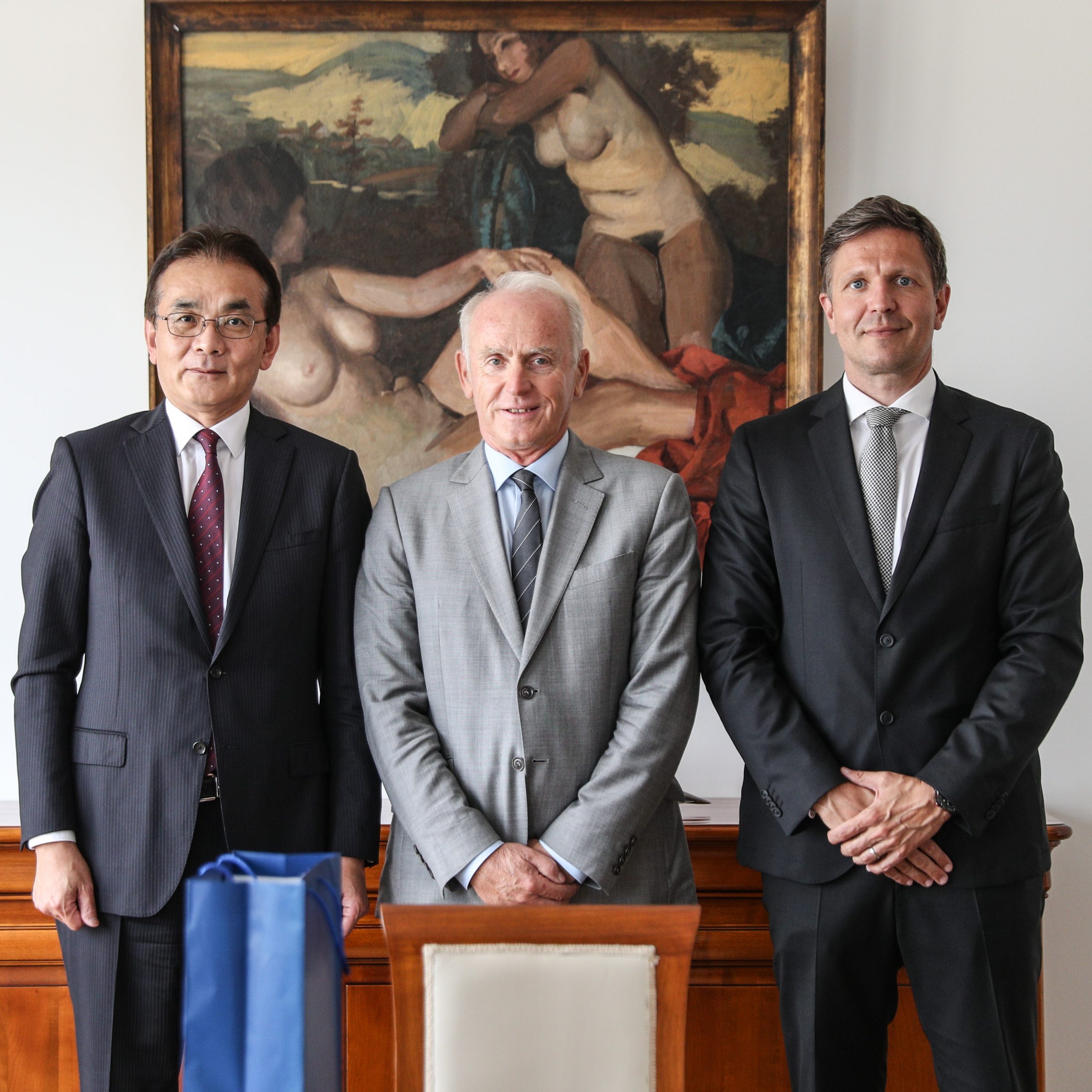 Last Thursday, the Japanese ambassador, his Excellency Mr Hiromichi Matsushima, paid an official visit to the BTC Company in BTC City Ljubljana. During the visit, we have discussed the past successful cooperation of the BTC Company and the Embassy of Japan in Slovenia, presented the BTC Company’s 2025 Strategy and some of our projects, as well as sought to advance our friendship and business cooperation. The ambassador also visited the Slovenian Digital Center, within which we will cooperate in the December activities, dedicated to Industry 4.0 and robotics.

On behalf of the BTC Company, the Japanese ambassador, His Excellency, Mr Hiromichi Matsushima, was greeted by Mr Damjan Kralj, M.Sc., CEO of BTC, d. d., and Mr Jože Mermal, Chairman of the Board of Directors. During the ambassador’s first official visit to our company, we first discussed the previous successful projects of the cooperation between the BTC Company and the Embassy of Japan in Slovenia and of the cooperation between other Japanese companies and partners. In greater detail, we discussed the Japanese developmental initiative Society 5.0, supported by the BTC Company as one of its main supporters in Slovenia. We are looking to further our cooperation in this field also in the future. We presented the business operations of our company, the BTC Company’s 2025 Strategy and other current projects to Mr Matsushima.

Upon the visit by the Japanese ambassador, Damjan Kralj, M.Sc., CEO of BTC, d. d., said: “The visit by His Excellency, Mr Hiromichi Matsushima represents further expansion of the economic developmental bridge between Slovenia and Japan. The BTC Company sees cooperation with Japanese companies as one of its significant business segments. Since 2019, when the Crystal Palace in BTC City Ljubljana hosted the 5th Forum at which the Japanese developmental initiative Society 5.0 was presented, we have designed and implemented numerous projects along with the Embassy of Japan in Slovenia and other partners. Among others, we have cooperated with the Slovene-Japanese business world, have taken part in the Slovene-Japanese project of smart networks NEDO, while AV Living Lab has along with the Toyota company developed a car sharing system Toyota DriveMe in BTC City Ljubljana. Our connecting is based on the synergy of values, such as respect, long-term cooperation, mutual trust and striving towards excellence, and on the mutual commitment towards developing new technologies, rational natural resource management, and on building a smart future in which technology will enrich people’s lives.”

Upon his visit, the Japanese ambassador, Mr Hiromichi Matsushima, said: “While our close cooperation with the BTC Company only goes a few years back, it has been very active and productive. We have mainly partnered up to organise a number of successful, well-attended events aimed at promoting the Society 5.0 development concept. BTC has been at the forefront of the joint efforts to implement this initiative in Slovenia and thus achieve another breakthrough in the Japanese-Slovenian bilateral relations, which I appreciate very much. After today’s visit and the interesting exchange of our views, I am certain that our partnership will keep strengthening to mutual benefit. Also, I was highly impressed with the advanced technologies of Slovenian companies that were showcased at the Slovenian Digital Center. I am really looking forward to the upcoming bilateral business forum we plan to organise in BTC City Ljubljana in cooperation with the Slovenian government, BTC and other stakeholders.”

As part of the visit to the BTC Company, the Japanese ambassador also visited the recently opened Slovenian Digital Center in BTC City Ljubljana. BTC Company is one of the project’s partners, while the Embassy of Japan in Slovenia will take part in the project’s activities in December. In the month, dedicated to Industry 4.0 and robotics, the Slovenian Digital Center will be visited by a delegation of the Japanese External Trade Organisation (JETRO), while the premium project’s sponsor for that month will be Yaskawa Slovenija, the Slovenian branch of the Japanese corporation that manufactures industrial robots. As part of the Slovenian Presidency of the Council of the EU, several presentations of companies and numerous events will take place until the end of the year. This will allow the broader public to come in contact with the most advanced technologies, products, services and educational programmes from the field of new technologies. Among the presenters in the Slovenian Digital Center during the visit of the Japanese ambassador were the BTC Company, AV Living Lab, d. o. o., LOTRIČ Meroslovje, d. o. o., Telekom Slovenije, d. d., ARCHIMEDES TECHNOLOGIES EU, d. o. o., C-ASTRAL, d. o. o., etc.

Visit by the Japanese Ambassador