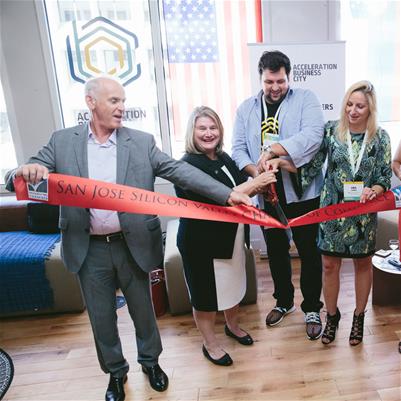 On Saturday, 24th September 2016, the ABC Accelerator opened its doors as the first European accelerator in Silicon Valley, USA. ABC Global Home Silicon Valley in this Mecca of entrepreneurship and innovations offers the possibilities for greater accessibility of knowledge via Stanford University to international investors. On this occasion, the proposal for a tighter cooperation between the cities of Ljubljana and San Jose was considered and accepted. Jože Mermal, President of the BTC Management Board, proposed the twinning of both cities. Sam Liccardo, mayor of the world’s capital of technology, was thrilled by his proposal and expressed his intent on strengthening the cooperation between both cities.

ABC Global Home, Silicon Valley represents a global expansion of ABC Accelerator in BTC City Ljubljana, the co-founder of which is the BTC Company, after Venture Gates – ABC Accelerator’s European subsidiary – opened its doors this July in Munich, Germany. The opening of ABC Global Home, Silicon Valley on 1,200 square metres brought joy to numerous European start-up companies which already have an established product and are seeking bigger investors. At the same time, the new subsidiary in Silicon Valley presents an opportunity for connecting Slovenia and its capital with this technologically advanced region.

The new home of start-ups in Silicon Valley was on the premises of the Accelerator solemnly opened by Dejan Roljič, ABC Accelerator founder, Ana Lukner, entrepreneur, and by Jože Mermal, President of the BTC Management Board. The latter pointed out that the opening of Ljubljana’s ABC Accelerator a year and a half ago was from the perspective of the BTC Company tightly connected to the establishment of the city of innovations – BTC City Ljubljana. ABC Accelerator first established itself across Slovenia and later on the European and global level.

The gradual expansion and international establishment of ABC Accelerator brings a new dimension not only to BTC City but also on a wider scale, said Mr Mermal, who also added: “ABC Global Home, Silicon Valley brings a lot of positive features to Ljubljana and Slovenia. We even have an idea of the Slovenian capital and the world capital of technology becoming twinned. My proposal for a tighter cooperation on the level of our cities was greeted with enthusiasm by Sam Liccardo, mayor of San Jose, who with his consensus made a step forward towards more extensive cooperation of Ljubljana and San Jose as the centre of the fastest development of global innovations.”

The City Hall in San Jose hosted the event, attended by around 200 guests from the fields of politics, economy, and the academic sphere, among whom were also Boris Koprivnikar, Vice-president of the Slovenian government and Minister of Public Administration, Tomaž Berločnik, President of the Management Board of Petrol d.d., Tjaša Ficko, Deputy mayor of Ljubljana, Rose Herrera, Deputy mayor of San Jose, and Jure Leskovec, entrepreneur and professor at Stanford University. The guests were thrilled about ABC Global Home, Silicon Valley, since it brings progress and development to Slovenia and to promising start-ups.

With the establishment of ABC Accelerator and ABC Hub, the BTC Company established BTC City Ljubljana as a city of innovations. By building business culture on the basis of innovativeness, creativity, and constant dynamics as well as on creating opportunities for the current and the next generations, the BTC Company is continuing with its development. As such, it is realising its vision in compliance with the BTC’s Strategy 2020 which predicts the BTC Company becoming an open-dialogue company by 2020. This Monday, the Ljubljana’s ABC Accelerator will host already its fourth 3-month-long programme for 30 new start-ups from ten countries, which will transform their innovations into business models in the scope of the programme Internet of Things and Internet of Everything.