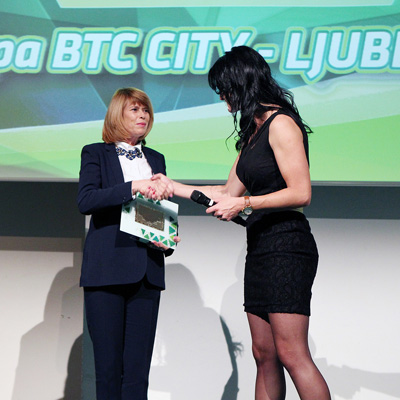 The annual event, which is organised by the Slovenian Cycling Federation, honours the most remarkable successes of Slovenian cycling in the previous racing season. Team BTC City Ljubljana is one among this year’s award winners, who have had a significant impact on Slovenian cycling in 2016.

“For the third year in a row, team BTC City Ljubljana has heightened their tempo and once more achieved tremendous results. By taking part in the Rio 2016 Olympic Games, placing 7th at the World Championships in Doha, winning a race on the Women World Tour, and achieving numerous other successful placements, the girls have fought their way among the twenty best teams in the world (12th place in the Women World Tour), which represents a historical achievement for Slovenian cycling as well as for Slovenian brands, which were promoted by the team at the biggest cycling events worldwide (in Madrid, Paris, London, Qatar, USA, Flanders, China, etc.). With their individual and team efforts, they bring us joy while also strengthening the team’s reputation, contributing to the recognisability of its supporters and of Slovenia as a cycling-friendly country within as well as beyond its borders, and promoting women in sports. We are convinced that this winning female energy will remain our source of pride in the years to come,” says the team’s leadership.

Since 2014, when the City of Ljubljana, the BTC Company, and Cycling Association Rog came together to found the first Slovenian professional women’s cycling team, the girls have exceeded all expectations. With excellent performances, the 13-member team continues to inspire thousands of fans all around the world.