24-hour cycling with Marko Baloh: cyclists and visitors raise more than 1,000 Euros for the project Gibaj in zmagaj 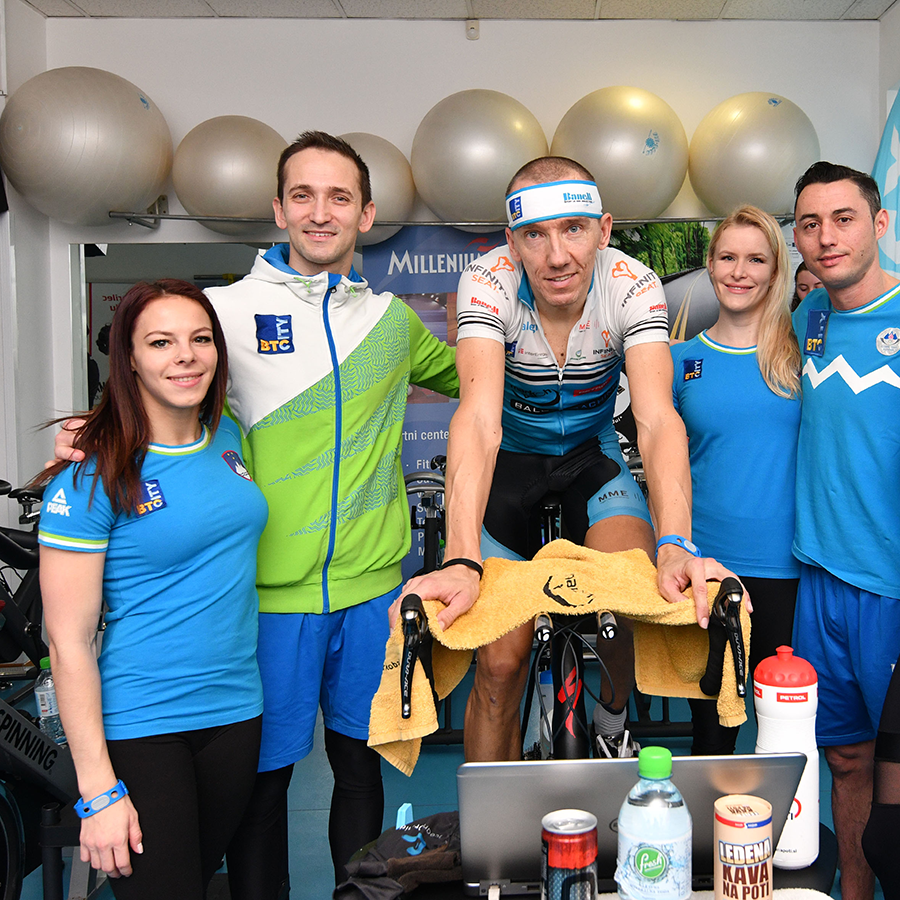 Last Friday, 26 January 2018, Sports Centre Millenium in BTC City Ljubljana saw the beginning of the 24-hour cycling event with Marko Baloh. At this charity cycling challenge, which was the 13th of its kind in a row, supported by Rotary Club Ljubljana Nike, the famous Slovenian ultramarathon cyclist Marko Baloh rode alongside more than 80 fellow bike fans. This year, the proceeds of the event went to the project Gibaj in zmagaj (“Move and Win”), for which the participating cyclists and visitors raised a total of EUR 1,063.00.

The traditional cycling challenge in Sports Centre Millenium successfully fulfilled its humanitarian purpose once again. Marko Baloh, the veritable leader of the project and captain of the cycling team that embarked on a virtual 24-hour tour of Slovenia, and even parts of America, on stationary bikes, said: “I’m happy that so many people responded to our call – donors as well as cyclists who biked by my side. At races such as RAAM, the loneliness and the weather can make for a pretty dreary experience. Here, however, I had company throughout the entire 24 hours, including at night. This wasn’t just a charity event, but also a great training session to prepare for the coming season, in which I will take part in races in Slovenia and Switzerland, among others. The main goal of the season is to break the world record in 24-hour road cycling and bring it back to Slovenia.”

Despite his knee pain, Marko rode 820 kilometres and burned 15 thousand calories. Every winter, he spends as many as 300 hours cycling on the stationary exercise bike, so virtual biking makes for great entertainment.

Some well-known figures also attended the event, including kayaker Nejc Žnidarčič, gymnasts Tjaša Kysselef, Sašo Bertoncelj, Mitja Petkovšek, Ivona Vukičevič and Adela Šajn, diver Samo Jeranko, and cyclists of team BTC City Ljubljana. Comedian Tin Vodopivec made sure that everyone had a smile on their face.

Participants were also encouraged by Jože Mermal, President of the BTC Management Board: “Since we actively promote the advancement of Slovenian cycling, cycling lies close to the heart of the BTC Company. Among other things, we sponsor the famous Marathon Franja BTC City, we support cycling team BTC City Ljubljana, and we support the brilliant Marko Baloh. We encourage young people to practice a healthy lifestyle, so I am heartened by the fact that cycling attracts an increasing number of new fans and athletes. I am especially happy whenever a sport gains a broader dimension, such as charity in support of young people in the case of this 24-hour marathon.”

Joining forces, attendees raised EUR 1,063.00 for the project Gibaj in zmagaj (“Move and Win”). The funds will go towards a summer camp aiming to promote a healthy, active and positive lifestyle among young people, as well as appropriate body weight. At four separate weeklong camps, the organisers will provide 300 young people with an unforgettable active holiday experience, including activities and workshops in healthy nutrition, an active lifestyle, and positive self-esteem.

The 24-hour cycling event was accompanied by live music and a DJ. Three spinning sessions were organised during the event, as well as training for Marathon Franja BTC City, which will this year take place between June 8 and June 10.