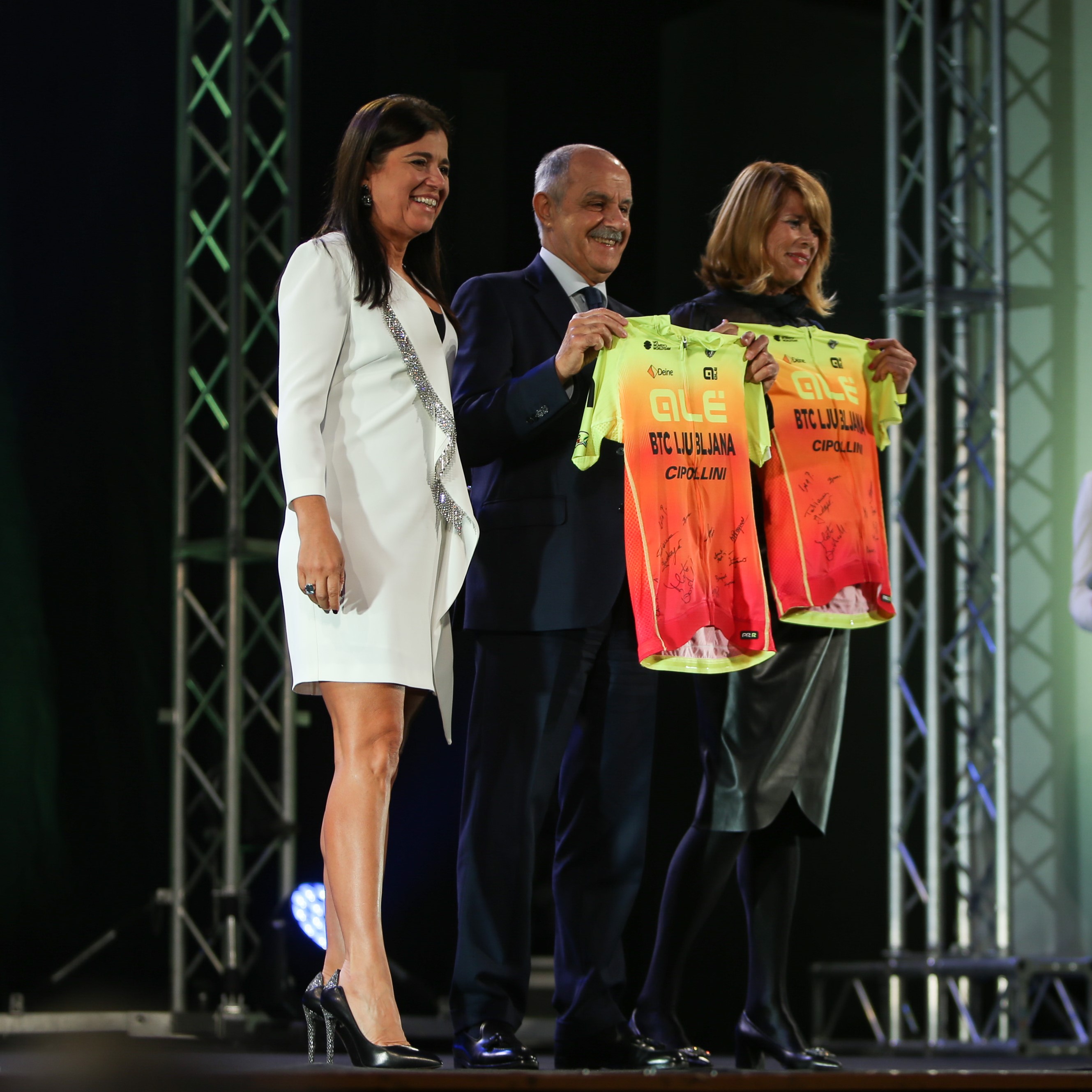 On Saturday, November 16, 2019, the new women’s cycling team ALÉ BTC Ljubljana was presented in Verona, Italy. The team will compete in prestigious UCI women’s WorldTour races. The new team consists of twelve riders, combining cyclists from the Slovenian team BTC City Ljubljana and the Italian team Alé Cipollini. The management and technical staff also come from these teams. The new team will face its first challenge in January 2020, when the girls will compete in Australia.

The presentation at Verona’s Palazzo della Gran Guardia at the Piazza Bra, exactly where Primož Roglič stepped on the podium back in July, was attended by many prominent guests, including one of the best sprinters of all time, Mario Cipollini, two-time Giro winner Paolo Savoldelli, who was also the host of the event, President of the Italian Cycling Federation and Vice-President of UCI Renato Di Rocco, famous Italian pasta maker Giovanni Rana, Tadej Pogačar, Slovenia’s biggest cycling talent, and the management of the Zechetto group, which includes Ale, the globally renowned bike clothing manufacturer.

The twelve riders of the new women’s cycling team ALÉ BTC Ljubljana were presented on stage. This is a team that will compete in the top women’s cycling category in UCI WorldTour races as well as other prestigious professional women’s cycling races.

This Italian-Slovenian partnership will enable both Slovenian and Italian cyclists to continue competing with the best in the world. In June, the team submitted a request for a WorldTour licence, hoping to secure one of just eight spots available to teams at the highest level in 2020 – the rest will be classified as UCI women’s teams.

Upon merging the teams, Alessia Piccolo, Vice-President of team ALÉ BTC Ljubljana and Director of APG Srl, said: “Partnership with BTC is an honour and a big step forward for our team. It will give new life and enormous support to the women’s team of the Zecchetto group (Alé, DMT, Cipollini) and will be central in view of the request for the team’s entry into the Women’s WorldTour. Together we will certainly achieve big goals and give birth to one of the biggest women’s professional teams of the international cycling scene.”

Maja Oven, Director of Market Communications and Public Relations at BTC and Vice-President of team ALÉ BTC Ljubljana, added: “Partnership with Alé Cipollini enables the cyclists of team BTC City Ljubljana to compete in the most challenging races in the world, as they did in the past five years. The partnership, of which we are immensely proud, can also help raise the profiles and strengthen the reputations of BTC and other sponsors from the domestic and foreign markets. Since Slovenia is seeing a growing interest in women’s competitive cycling, the youth women’s teams of Cycling Club Kranj and Cycling Association ROG merged to form the new youth team BTC CITY LJUBLJANA SCOTT, which will further promote the development of women’s cycling in Slovenia.”

Despite numerous injuries, Slovenian women’s cycling team BTC City Ljubljana has had a season interspersed with important achievements. For example, they have qualified for the 2020 Tokyo Olympics, which was their foremost goal for 2019. In addition, they took part in 103 international races and placed 17th in the UCI and WorldTour rankings. Four riders were ranked among the top 100 in the world, namely Eugenia Bujak (40th place), Nastya Chursina (83rd place), Urša Pintar (89th place) and Hayley Simmonds (91st place).

Since 2014, when it became the co-founder of women’s cycling team BTC City Ljubljana, BTC has played an active role in the development of recreational and professional cycling in Slovenia. Since 2003, the company has also supported Marathon Franja BTC City, an international recreational and competitive cycling event, which is part of the UWCT Gran Fondo series. By supporting this discipline, BTC doesn’t just contribute to the elite results achieved by Slovenian cycling but also to the popularity of cycling as exercise among all generations. It strengthens Slovenia’s reputation as a green, sporty and cycling-friendly tourist destination, and promotes it far beyond the country’s borders.