Franja – more than a Gran Fondo event. A story whose winning energy has been connecting and inspiring all friends of cycling for 40 years 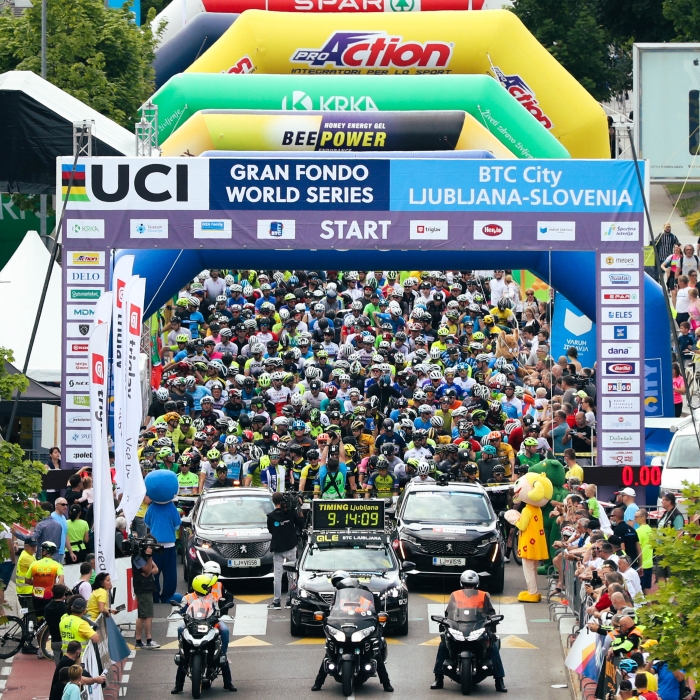 This past weekend, on 12 and 13 June 2021, the whole of Slovenia breathed in sync with the cyclists participating in the 40th Marathon Franja BTC City, organised by Cycling Association KD Rog with the support of the BTC Company, the City of Ljubljana, and other partners. Both days saw the participation of more than 4000 cyclists of all generations from 20 countries, who rode on a total of five routes. A part of the UCI Gran Fondo World Series, Marathon Franja is the greatest celebration of cycling for recreational riders and serves as a qualifier for this year’s World Championships, which will take place from August 13 to 15, 2021, in Sarajevo. This year’s Marathon, whose title sponsor was the BTC Company (for the 19th year in a row), was organised in compliance with all applicable Covid-19 restrictions, the recommendations issued by the relevant health authorities and UCI guidelines.

Marathon Franja BTC City is a sporting event with the longest tradition in the UCI Gran Fondo World Series in particular and Slovenia in general. This year’s 40th anniversary edition of the Marathon included five routes, each with a different profile and difficulty level. The most ambitious riders took up the challenge offered by the Big Marathon Franja BTC City (156 km) or the Triglav Little Marathon Franja (97 km), nature lovers revelled in the green scenery of the Hervis Barjanka route (83 km), families enjoyed the IKEA Family and School Marathon (25 km), and the smallest kids tested their skills on the Vzajemko kids’ course (1200 m). A special feature of this year’s programme was the start of the final (fifth) stage of the Tour of Slovenia in BTC City Ljubljana – the stage ran the route of the Little Marathon Franja and finished in Novo mesto.

Judging by the participation numbers, this year’s anniversary edition of Franja was an eagerly awaited event despite coronavirus prevention measures. Franja once again saw the participation of many of its loyal cyclists, who wouldn’t miss it for the world and who have ridden in every single one of its 40 iterations, such as Roman Blatnik, Ljubo Dobaj, Dušan Dobnikar, Jože Dovžan, Ivan Ertl, Bojan Mandeljc, Konrad Merlak, Milovan Plahuta, Andrej Repovš and Ferdinand Vičič.

This year’s tagline was “From Franja to the Tour”, highlighting Franja’s role as the breeding ground for Slovenian champions, for example Tadej Pogačar, who started his career 12 years ago precisely in KD Rog 12. Tadej’s address of the riders at the start of the Marathon – telling them to “Ride on!” in proper cycling fashion – and his word of thanks to KD Rog were special indeed.

The main venue of the event was once again BTC City Ljubljana. Jože Mermal, President of the Marathon Franja BTC City Organising Committee and Chairman of the BTC Board of Directors, the BTC Company being the title sponsor of the Marathon for the 19th year in a row, was thrilled about how the 40th Franja turned out: “This past weekend, on the occasion of its 40th anniversary, Franja shone as bright as ever. Looking at the thousands of keen cyclists of all generations, who could hardly wait to start riding, and the diligence of the organising team, having approximately 2,000 members, no one could remain indifferent. Upon this year’s anniversary, especially us longtime supporters of Marathon Franja reminisced about the many challenges, uncertainties, adventures and lovely memories we made at Franja so far. And the most beautiful thing we can say to ourselves today is: we were right to have chosen Franja and to have stayed the course. What Franja has become has turned out to be the most beautiful dream one can imagine. All of us together – organisers, participants, supporters and friends of cycling – are creating a story that is larger than us. And the beauty of this story is that it is no longer just about racing, competition and the final result, but much more. Every year, Franja spreads among us an energy that stands for togetherness, persistence, ambition, passion, and a love of sports and nature. With such energy, we are all winners. On the occasion of Franja’s birthday, I wish for her, as well as for ourselves, to nourish this winning energy for many years to come.”

Gorazd Penko, the Director of Marathon Franja BTC City, was especially proud of the 40th iteration of the Marathon: “The 40th anniversary of Marathon Franja was quite emotional for us organisers because of the many years of beautiful memories, anecdotes, sacrifice and joy associated with it. Most of all, though, because of the strong bonds of friendship between us. That is why this past weekend was full of joy and taking pride in the fact that we have kept on going despite countless challenges. This year’s slogan was chosen very wisely, reflecting the fact that if we didn’t have Franja, we also wouldn’t be able to enjoy many other things, such as the achievements of cycling club KD Rog and our Slovenian road racing champions. I’m grateful and proud that I can help write this story together with Franja’s other supporters, such as the BTC Company and the City of Ljubljana, other municipalities lying on the route, our indispensable organising team and our sponsors. One thing is certain: after this year’s Marathon Franja, we are even more motivated for the forty years ahead.”

Following another successful iteration of Marathon Franja, Aleks Štakul, President of KD Rog, noted: “We’ve had a successful ride through these four decades. We got through it all and won because we are bound by comradeship, friendship, courage, solidarity and persistence. The values and virtues of every Franja participant who acts in line with her historical tradition and mission. She is our star that shines forever bright and never goes out.”

The organising activities for this year’s Marathon Franja took place in cooperation with the relevant public health institutions. All participants had to follow a Covid-19 prevention protocol: before the start, they all had to wear face masks, sanitize their hands and keep a safe distance between the bikes, while participants at the Sunday events also had to provide a negative rapid test result, a certificate of vaccination or proof of having recovered from Covid-19 in the recent past. Rapid Covid testing was organised for the cyclists on Friday and Saturday right there at the venue.

This year’s celebration of cycling, just as all that came before, wouldn’t have been possible without its loyal supporters. As part of the event’s accompanying programme, Jože Mermal, President of the 40th Marathon Franja BTC City Organising Committee, awarded a plaque to Tadej Pogačar and three deserving individuals: Tone Fornezzi – Tof, the “father” of the idea of Marathon Franja, Janez Winkler, who made it possible for the first Marathon to take place back in 1982 with police support and then became a longtime president of the Marathon’s organising committee, and Zoran Janković, the Mayor of Ljubljana. The organisers would like to extend their sincere thanks to all the other municipalities and local communities lying on the routes for their support, as well as to the sponsoring companies, namely: Hervis, IKEA, Vzajemna, Telekom Slovenije, Športna Loterija, Krka, Delo, Europlakat, Triglav Skladi, Medex, MDM, Spar, Bičikleto, Kobal transporti, Zott, Generali, Scott, Dana, Peugeot, Mercedes Benz, Spletnik, Dolinšek, Slovenske novice, Polycom, Barilla, RTV Slovenija, Astoria, Mizarstvo Peklenk Boris, Gran Cereale, Camera, Dvig, Knoppers, Banem, Združenje šoferjev avtomehanikov Žiri, Kolektor, Plinovodi, and Nicha. Many thanks also to the supporting staff: the Slovenian Police, the security guards and race marshals, the firefighters, the Administration for Civil Protection, the medical staff and the countless volunteers.

The story of Marathon Franja began in the 1980s. The idea for Marathon Franja arose in the minds of Zvone Zanoškar, a legend of Slovenian and Yugoslavian cycling, and Tone Fornezzi – Tof, a great lover of bikes and sport in general, always full of original ideas. Like the experienced rider that he was, the latter already had a route in mind in 1978. He rode it a year later together with Zvone Zanoškar and two elite riders from cycling club KD Rog, Andrej Žavbi and Vinko Polončič. When they were enjoying a short break at Cerkno, they saw the “Hospital Franja” signpost and realised that their cycling “marathon” could very well be named after the partisan hospital and its leader, Dr Franja Bojc Bidovec, since cycling is known for its values of comradeship, persistence, nobility, courage and decisiveness. The first official Marathon Franja took place in July 1982, when the first 700 cyclists braved the route. Since then, Marathon Franja BTC City has hosted more than 164,000 officially registered cyclists from over 70 world countries. In 2020, Franja was the only UCI Gran Fondo event to take place during the Covid-19 pandemic. In recent years (with the exception of 2020 and 2021), yearly participation numbers have grown beyond 7,000 cyclists, with over 100,000 spectators and more than 2,000 members of the organising team. The rising share of women taking part in Franja, which has recently surpassed 25%, is also encouraging. Marathon Franja is aimed at realising the competitive goals of professional cyclists as well as promoting recreational sports among all generations.