The Wheels Of Celebratory 40th Marathon Franja Are Already Spinning … 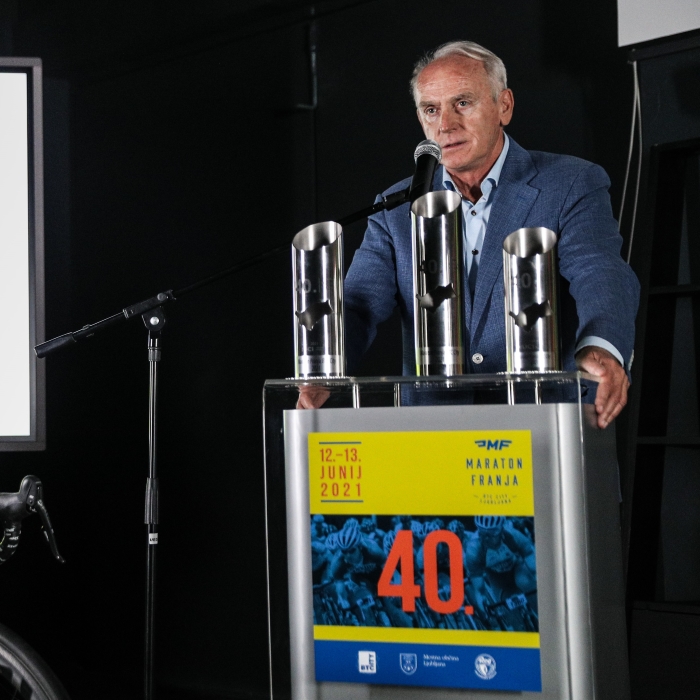 At today’s press conference, the Marathon Franja BTC City’s organisers – Cycling Club KD Rog, supported by the BTC Company, the City Municipality of Ljubljana, and other partners – announced the celebratory 40th edition of this cycling festival, which will take place on the second weekend in June, i.e. on 12 and 13 June 2021. Marathon Franja, which has been sponsored by the BTC Company as the general sponsor for the past 19 years, will take place while strictly following all the necessary Covid-19 measures and instructions by the healthcare professionals and UCI.

A testament to the popularity of Franja among Slovenian cycling fans is the information that prior to 1 June, the organisers have already registered over 2,700 applications to all 5 events. This year’s celebratory Marathon will take place with the motto “From Franja to Tour” and thereby spread the message about Franja as the cradle of Slovenian cycling champions, including Tadej Pogačar, who started his cycling career in KD Rog and at Franja and who last year won the most prestigious race Tour de France.

In 2021, BTC City Ljubljana will once again be the central spot of Marathon Franja BTC City. Upon the announcement of the Marathon, Mr Jože Mermal, President of the Marathon Franja BTC City Organising Committee and Chairman of the Board of Directors at BTC, which has been the Marathon’s general sponsor for 19 years straight, pointed out: “Marathon Franja has a special place in the BTC Company and in Slovenia. In 2003, when the BTC Company became the sponsor of the Marathon, we barely realised its exceptional potential. Today, at the brink of its 40th edition, we can be very proud. In all these years, Franja has time and time again proven its connecting energy of persistence, ambition, and love of sports and nature. In the past year, it added tenacity to its values. We are particularly happy to see this energy in not only the organisers but also in several thousands of loyal Marathon racers and numerous supporters and friends of Franja. Upon its birthday, we wish Franja the same as we wish best friends – we hope it stays our companion for many years to come and helps us cope with this new reality.”

Upon the start of the 40th Marathon Franja, Gorazd Penko, Marathon Franja BTC City director and Alé BTC Ljubljana sports director, proud of the organising excellence and the broad support of numerous cycling fans said: “All the organisers are proud to be celebrating Franja’s 40th birthday. We are proud to see an idea, which was introduced by a few cycling enthusiasts more than 40 years ago, be transformed into a cycling festival with over 7,000 racers on a normal year and an organising team of 2,000 members. We are proud to see it become a big story that connects and inspires not only racers but also numerous partners and friends of cycling. A story that persists even in the toughest of circumstances. Let’s not forget: an event like Franja represents an exceptional organising and logistics challenge even in normal circumstances. Its realisation during the pandemic adds elements of safety measures to the formula. Therefore, a special thanks must be given to thousands of volunteers and members of the support team who during the second weekend in June will be in charge of the safe and pleasant ‘Franja’s ride’ across Slovenia.”

The organising preparations of this year’s Marathon have taken place in cooperation with the competent public health institutions since the organisers’ aim is to ensure safety regarding the spread of infections among the racers, as well as the members of support teams. Find out more on the measures during the event by visiting www.franja.org.

Damjan Kralj, M.Sc., chief executive officer at BTC, pointed out: “Marathon Franja is a celebratory festival of all of us who co-create it and give it energy with each passing year. It is an excellent proof of the significance of cooperation and teamwork, both indispensable companions of winners. All representatives of the organisers, thousands of racers and volunteers as well as numerous supporters and partners – we all are a part of a much broader platform built around Franja, which is a synonym for values of all sports and athletes – persistence, discipline, courage, bravery, cooperation and respect. The BTC Company shares these values and spreads the spirit of Franja through the support of numerous sports organisations and athletes from different disciplines. It was exactly these Franja’s values that the BTC Company recognised in 2003, as well as Franja’s compliance with the company’s business strategy and social responsibility activities. That is why we support Franja not only financially but also provide it with a vast organising support, including human resources and our own infrastructure. The BTC Company sees Franja as a story of partnership, in which we are all winners.”

Due to the restrictions related to the epidemic, a somewhat lighter accompanying programme is planned this year. Nevertheless, Tadej Pogačar will greet all Franja participants at the start in BTC City Ljubljana.

Since the very beginning back in July 1982, when Marathon Franja’s course was taken on by the first 700 cyclists, until now, Marathon Franja BTC City has in its 39 years seen the participation of over 160,000 officially registered racers from more than 70 countries. In 2020, Marathon Franja was the only UCI Gran Fondo cycling marathon in the World Series to be organised during the pandemic. Not taking into account the year 2020, Marathon Franja BTC City has greeted over 7,000 racers, 100,000 fans and more than 2,000 members of the organising teams in each of the last few years. It is very encouraging to see that the number of female racers taking part in Franja has grown over the last years (the sole exception being the year 2020), in which it has already surpassed 25% of all racers. The event combines the realisation of competitive goals of professional racers and the encouragement of recreational sports among people of all generations.

You can read more about Marathon Franja BTC City and the event’s programme by visiting http://www.franja.org/.