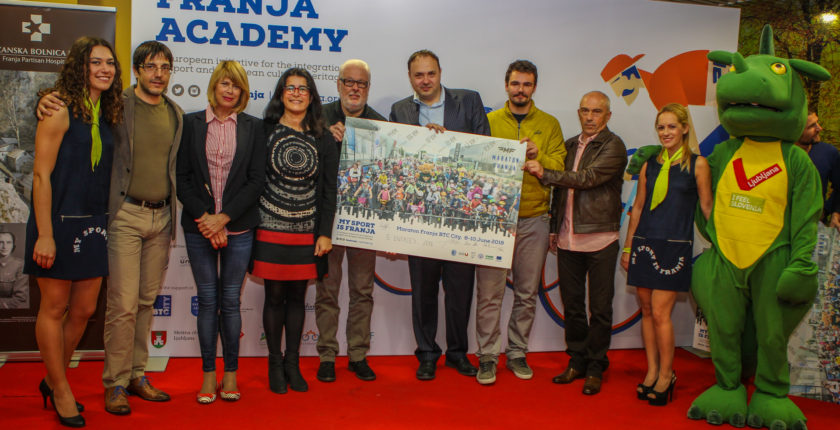 Highlights of Franja Academy 2017 were: excellent
lectures, exchanges of best practices, solutions to connect cycling,
cultural heritage and tourism, linking business and people from five
European countries and the conclusion that the opportunities for the
development of cycling tourism in Slovenia is still huge.

On the last day, prof. Janez Koželj, vice-mayor of the City of Ljubljana, mayor Miha Ješa of Škofja Loka and mayor of Roberto Felcaro
of Cormons in Italy spoke at Franja Academy. Felcaro together with
local partners from the Unione Italiana sport per tutti received the
award for the best performed My Sport is Franja cycling event abroad. Gorazd Penko (director Marathon Franja) and Maja Oven
(BTC City) gave the award which represented five free tickets to
Marathon Franja BTC City. The Franja event in Cormons in May attracted
the most participants of the four Franja events abroad.

Through videoconference, a live interview could be made with Amedeo Polito, the global event coordinator of L’Eroica.
Politio presented the development of his event which is the biggest
event in the world for vintage race bikes. L’Eroica also has a major
impact on bike tourism in Tuscany in Italy.

Franja Academy is part of the two-year European project My sport is
Franja and is supported with the Erasmus + program. The project is a
cooperation of five partners: cycling club Rog from Ljubljana, Unione Italiana sport per tutti from Friuli-Venezia Giulia, the Sports Association of the Istrian Region, Sportunion Carinthia and the Slovak Cycling Federation.
There were 34 representatives of the partner organizations at the
conference. Partners also brought experts who gave their views on de
development of bike tourism and connecting cultural heritage and
cycling.

The representatives of the partners also visited Partisan Hospital
Franja and they went on a bike tour in Ljubljana past the works of
architect Plečnik.

New at Franja Academy 2017 was a bike exhibition. More than a hundred
visitors were counted at the My Bike, My Heritage exhibition where
visitors were taken on a trip through the history of (Slovenian) cycling
with bikes, jerseys, pictures and videos. The exhibition visualized the
cultural values and heritage of the sport of cycling, with an emphasis
on Slovenia, cycling club Rog and Marathon Franja.

For many Slovenians, the name “Franja” represents more than just a
sporting event; over time, the name has become a symbol of the Slovenian
sports and folk culture. Powered by the spirit of Marathon Franja Samo Kofol and Mark Koghee designed this year’s Academy program.

The long-term goal of the My Sport is Franja project is that the name
Franja becomes a recognizable name in sport in Europe. Anyone can
express support for this by signing the petition “Signature for Franja”.
With smartphone or on the website.