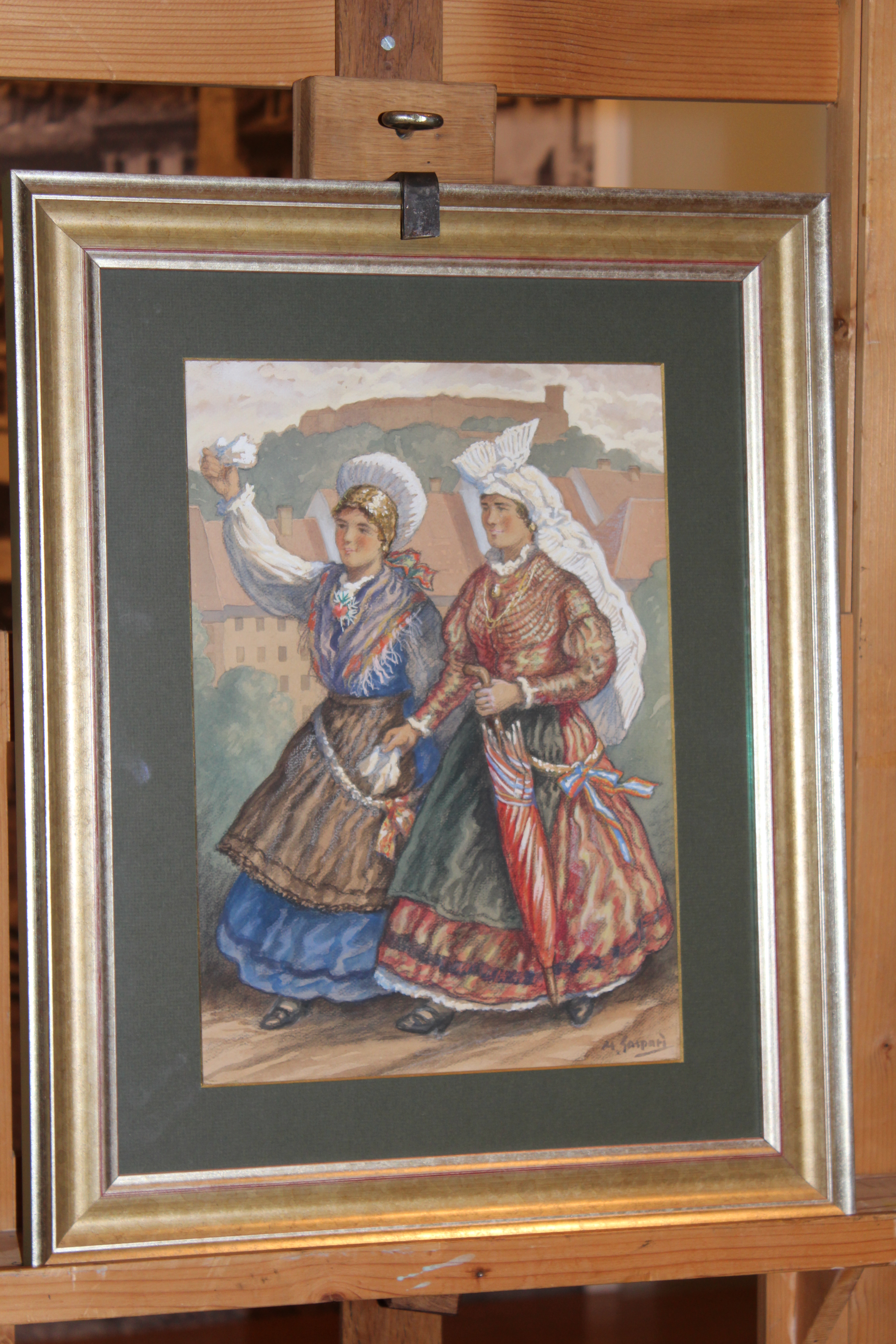 The work “Dekleta v narodni noši” which combines pastel colours and watercolours also stages a veduta landscape of Ljubljana, its houses and the Castle, with two Slovenian women in the foreground, both wearing a festive national costume, one with an “avba” and the other with a “peča” headdress. In the mid thirties of the 20th century the art work saw a reproduction in the form of a Slovenian national costume postcard. The art work which was bought from Gallery 22 by BTC d. d. will represent a fine contribution to the MGML institute’s art collection, the origin of which dates back to 1907.

Maksim Gaspari is a representative of Slovene Early Modernism. He shaped his unique style under the influence of secession in Vienna, where he acted as one of the founders of the art club Vesna. He became famous for his painting and illustrating skills and in Ljubljana also for portraying some of the most prominent locals. Since 1911 he lived in Ljubljana where he first worked as a professor of drawing and later as a restoration specialist for the Slovene Ethnographic Museum. For the majority of Slovenian art enthusiasts he remains recognisable because of his fine art interpretation of motifs which he found in the “old-fashioned” culture and the way of life of Slovenian people. He was awarded the Prešeren Award in 1952 for his work. In 1972 he became a member of the Slovenian Academy of Sciences and Arts.

Dekleta v narodni noši – fine art on paper – will represent a great contribution to the collection of the MGML institute which has been in the making since 1907. That year the first painting was bought on the initiative of the Mayor Ivan Hribar. The same year the current city collection was established, Hinko Smrekar depicted Maksim Gaspari as a painter. Soon, this drawing was bought to become a part of the city collection as well, which resulted in the foundation of what would later become a city establishment – the City Museum of Ljubljana, which opened its doors with a permanent collection in 1937. Since 2009, the drawing has been a part of the MGML institute’s collection. The city collection of the MGML institute keeps several Gaspari’s fine art works as well as useful objects. Noticeable among his landscapes is the motif Pod gradom (Under the castle) from the year 1915, the “nuns’ church”, and the Kodeljevo Castle. Among figurative depictions there is the artist’s self-portrait and his walking cane, as one of his personal items.