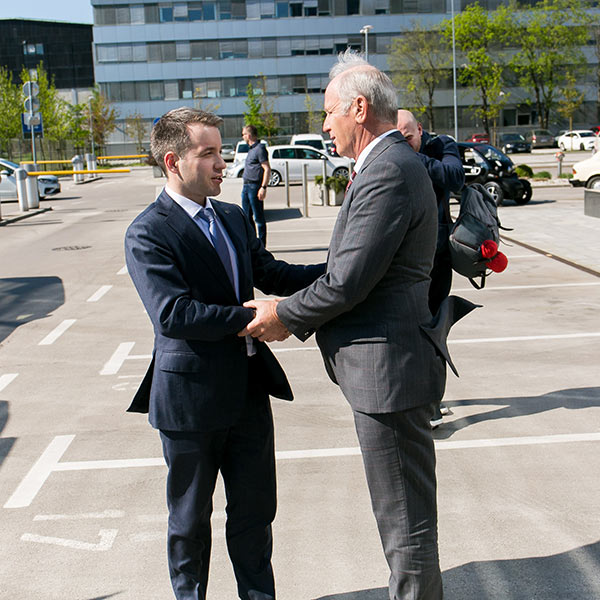 In the scope of his official visit to Slovenia, Nikolay Nikiforov, Minister of Communications and Mass Media of the Russian Federation, visited BTC City Ljubljana, where he was greeted by Jože Mermal, President of BTC Management Board, and Julij Božič, Chief Innovation and Digital Officer at the BTC Company. Mr Mermal and Mr Božič presented him with some digital solutions, which are being tested in the real environment of BTC City Ljubljana, such as payment of services with cryptocurrencies, autonomous driving, and smart energy. Minister Nikiforov and Mr Koprivnikar, Minister of Public Administration of the Republic of Slovenia, had the opportunity to take a closer look at the receipt of the first test payment with a cryptocurrency offline, which was made the day before the visit by Mr Mermal in the Atlantis Water Park. With such initiatives BTC City Ljubljana is truly transforming into a smart city.

At the meeting with the Russian Minister, the Institute Jožef Stefan was presented with projects from the fields of artificial intelligence and the use of big data (Event Registry), management of smart companies, optimisation of energy use, smart cargo transport, and infrastructure of smart cities.

Minister Nikiforov listened to the presentations with great interest and suggested a strengthening of BTC City’s cooperation with Russian companies in the scope of ABC Accelerator, as well as announced his intentions to revisit Slovenia.