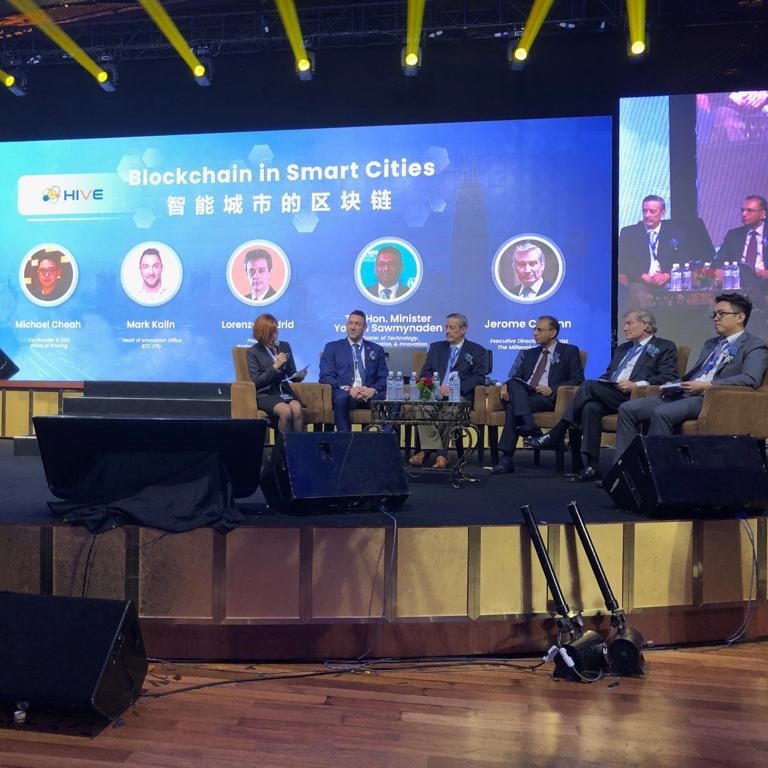 Blockchain enthusiasts from all around the world came to hear and exchange about blockchain technology and global blockchain movement, which is lately catching attention in many industries worldwide.

The Summit is a grand final event of the Blockchain for Sustainable Development Goals Tour, which lasted for five months across different countries in Europe and Asia. The tour has brought industrial key figures and prominent blockchain-related projects and founders to share their valuable knowledge with fellow enthusiasts.

As Blaž Golob, president at EUBC HUB said, “Global Blockchain adoption around the world is like a symphony – it is about the culture of the people behind this organisation. And together, we harmonise as we advocate for blockchain technology adoption; we bring capacity, and we initiate capable projects around the world.”

At the event, three informative series of forums featuring key panellists who are experts and key industry players, were highlighted the Summit. The forums were dedicated to particular themes in relation to blockchain:

As one of the key conclusions from the event was that blockchain is the technology for the future, and that more and more countries are coming together in support of EUBC HUB’s mission to advocate for an international adoption of Blockchain technology for SDGs.

In 2019, EUBC HUB and its Nodes will continue to bring changes with blockchain technology in order to accelerate the achievement of SDGs for the global society. In the near future, EUBC HUB is expanding its perimeter to Africa, going towards more global connections. EUBC HUB is positive about this prospect and the formal establishment of the African Blockchain HUB is being discussed.

The EUBC HUB has established a strong global presence while advocating for Blockchain supporting realisation of Sustainable Development Goals (SDGs) as envisioned by the United Nations (UN SDGs 2030 Agenda). We have got onboard most of the visited countries to join our global mission by signing a Memorandum of Understanding (MoU) and establishment of Nodes in their respective countries. In Kuala Lumpur, all Chairs of the established Nodes signed a declaration reaffirming their commitment and dedication to the following seven key areas:

With the signing of this MoU, EUBC HUB together with its Nodes are setting a foundation to form WBC HUB. It is envisioned to become the world’s leading HUB and consequently multistakeholder platform, supporting successful development, research, and progress of blockchain technology.

Tadej Slapnik, speaking after the signing said that, “EUBC HUB together with Asian Blockchain HUB and the emerging one, African Blockchain HUB, are trying to use all technologies and knowledge that we have to connect and achieve SDGs. We will advocate and support the use and development of blockchain, in consonant with regional and global values and principles of good governance.”
Meanwhile, the 2019 Euro-Asia Blockchain Summit Agenda also gathered global, multistakeholder audience, experts in the field, and truly diverse insights about blockchain-related developments in 20 countries.

European Blockchain HUB (EUBC HUB) is an independent organization who champions blockchain technology for transparent, democratic, decentralized, and safe business operation. EUBC HUB first established its presence as a pioneer in the blockchain industry in May 2018, with the aim to advocate the development of smart regulation for blockchain development and digital entrepreneurship ecosystem at European Union (EU) institutions, EU member States, and other countries.

Since its initial establishment in Europe, the EUBC HUB expanded to Asia, making its first Asia node. The Asia Blockchain HUB marks the growth of EUBC HUB as trendsetter of blockchain technology in which the industry will set to see both Europe and Asia stakeholders thrive globally.