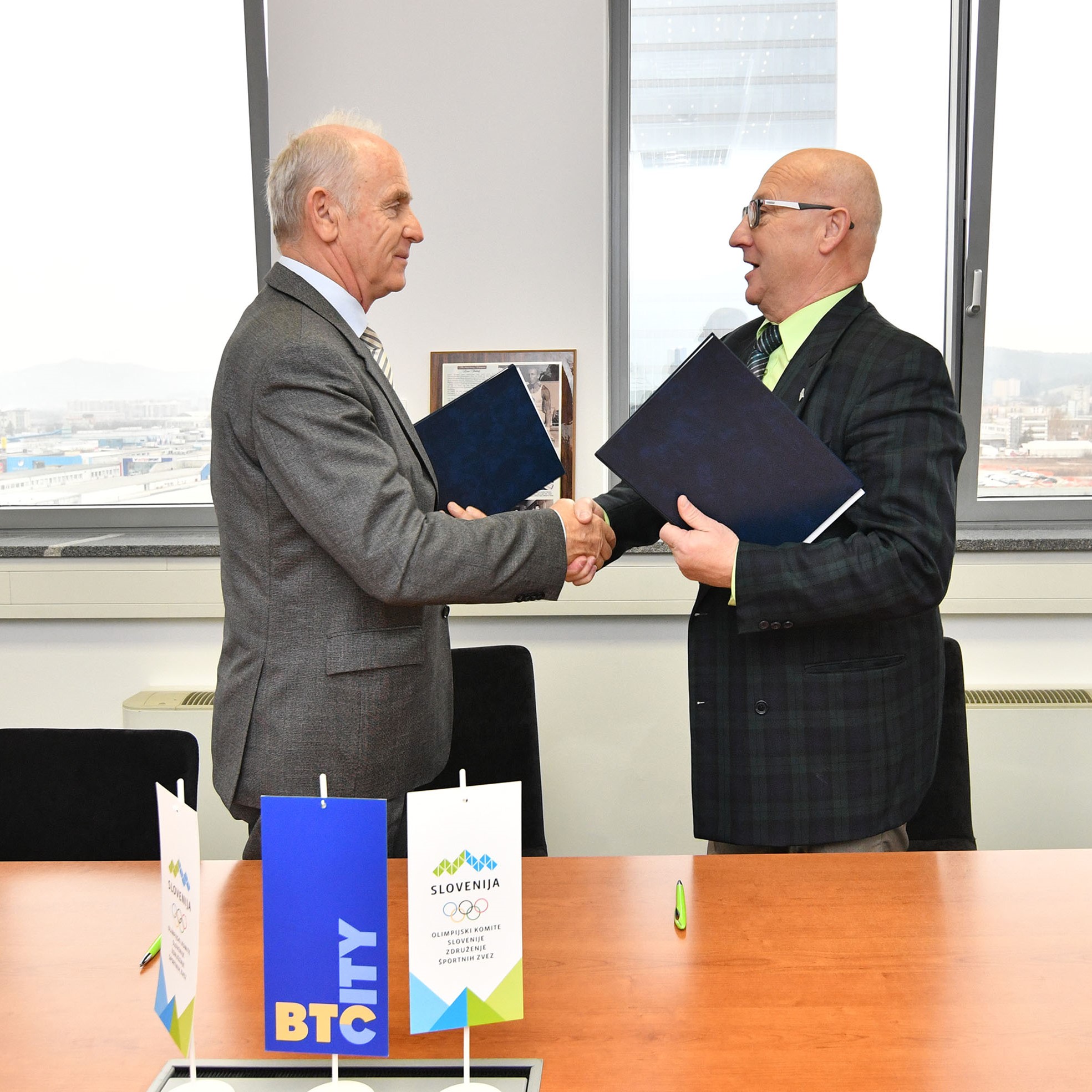 BTC and the Olympic Committee of Slovenia – Association of Sports Federations (OKS) have signed a new sponsorship agreement. With the agreement, BTC, a long-time supporter of OKS, became one of OKS’s principal sponsors for the Olympic period PyeongChang 2018– Beijing 2022. By supporting Slovenia’s emerging talent as well as its already established athletes, BTC is raising awareness about the importance of an active lifestyle and strengthening the culture of sports in Slovenia.

Today, in the offices of the Olympic Committee of Slovenia in BTC City Ljubljana, President of the BTC Management Board Jože Mermal and Chairman of the Olympic Committee of Slovenia – Association of Sports Federations (OKS) Bogdan Gabrovec signed a new sponsorship agreement, which will remain in force until the end of 2022. With this agreement, BTC has become one of the biggest sponsors of OKS.

Upon signing the agreement, Jože Mermal, President of the BTC Management Board, said: “I am happy that we have further enhanced our cooperation and committed ourselves to the continued support of a variety of sports disciplines and Slovenian Olympic athletes with this new sponsorship agreement. We believe that the secret of success lies in the power of support, which propels athletes toward the desired goal. It enables the athletes to have quality training and compete at the most elite sporting event, the Olympic Games. Of course, there is also the broader significance of supporting Olympic sports, that is, promoting sports in general on a professional as well as recreational level and stressing its importance for a healthy life.”

Bogdan Gabrovec, Chairman of the Olympic Committee of Slovenia – Association of Sports Federations (OKS), added: “I remember the moment when our story with the BTC Company began … Despite the initial obstacles, which we later successfully surmounted, our move to BTC City was the right decision. From that day on, we created many beautiful stories together, one of which deserves special mention here. The most prominent added value of the sponsorship and the move of our umbrella sports organisation to the ‘smart city of opportunities’ is being in step with the innovations and new features provided by this company, and the growth of the Olympic Committee together or in parallel with BTC. Two such new acquisitions are certainly the Olympic Education Trail and the Slovenian Olympic Education Centre, which help spread the Olympic spirit and values. Our decision has proved to be the right one, and I am proud that we upgraded and reinforced our partnership today.”

Since May 2015, the Olympic Committee of Slovenia – Association of Sports Federations has its offices in BTC City Ljubljana. BTC City Ljubljana is also home to the Slovenian Olympic Education Centre, which organises many activities for children, young adults, athletes and other sports lovers, promotes sports and Olympism, and showcases the history of Slovenian Olympic sports. Much knowledge can also be gathered on the Olympic Education Trail, which proceeds along the streets of BTC City Ljubljana and educates people about Olympism through plaques affixed to benches. At the Trg mladih Square, there is also an Olympic clock counting down to the opening of the next Olympic Games.

BTC is a long-time partner of the Olympic Committee of Slovenia. Prior to this partnership, it also collaborated with the Slovenian Olympic Academy. Elite athletes supported by BTC participate in the Olympic Festival, organised annually by OKS with a view to promoting sports among children. It is precisely through recreational sports undertaken early on that professional athletes are made.

By supporting Olympism, BTC is fulfilling its commitments in the domain of social responsibility. As part of its socially responsible practices, BTC has supported numerous athletes and sports organisations who have achieved top results at national and international competitions. With its support, the company provides athletes with the means necessary to ensure quality training, talent development and competition. BTC is especially active in Slovenian cycling, gymnastics, and ski jumping; in addition to professional sports, it furthermore takes special care to promote recreational sports.