Reinforcements in the BTC City Ljubljana women’s professional cycling team and in the Radenska Ljubljana men’s cycling team, plus a new cycling school for young girls 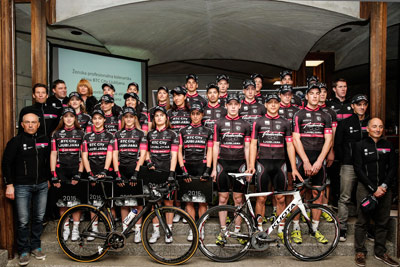 On the wings of the excellent results from the past season and full
of self-confidence, the members of the first Slovenian women’s
professional cycling team BTC City Ljubljana are ready to take on their
2nd racing season. This year, the Slovenian team will include Polona
Batagelj, Špela Kern, Alenka Novak, Anja Rugelj, and Urša Pintar from
Slovenia, Eugenia Bujak from Poland, Martina Ritter from Austria, Elena
Valentini from Italy and Mia Radotić from Croatia. The established
cycling team will be joined by experienced new members Jelena Erić from
Serbia, Olena Pavlukhina from Azerbaijan, Eva Lechner from Italy and
Urška Žigart, Anita Žnidaršič and Tesa Vilar from Slovenia.

The first race of the season for the BTC City Ljubljana women’s
cycling team will be in March, when the team will race in the legendary
one-day race – Strade Bianchi – in Tuscany, Italy. A Slovenian highlight
of this year’s women’s cycling season will be one of the most demanding
and most prestigious races on the women’s UCI calendar – Giro Rosa. The
10-day multi-stage race has been on the calendar since 1988. This
year’s Giro Rosa will start with a prologue on July 3rd in Ljubljana,
with the second stage starting in Kamnik and finishing in BTC City
Ljubljana. The organisation of such an important cycling event presents
an opportunity for a new approach in forming standards for the
candidature, realisation and assessment of results with regard to big
international sports events in Slovenia.

At the presentation of the cycling teams, Gorazd Penko, sports manager and coach of team BTC City Ljubljana,
reminded us all of the team’s excellent results in the previous year
and pointed out some highlights of the upcoming season: “In their first
competitive season, our cyclists achieved amazing results and surpassed
all expectations. The team reached an excellent 16th place in the UCI
rankings and 15th place in the UCI World Cup among 31 participating
teams. This year, our goal is to improve on these results. With some new
members added to the team, I am certain that we will succeed. The team
will take part in most of the UCI World Cup races as well as in other
important stage and one-day races. One of the highlights of the season
will certainly be the Giro Rosa race in Ljubljana, while we also put
great importance on the second part of the season, with some stage races
in France.”

The men’s cycling team Radenska Ljubljana has also undergone some
changes. Remaining in the team are Marko Pavlič, Rok Korošec, Jure
Miškulin, Žiga Ručigaj, Martin Otoničar, and Matic Šafarič Kolar, while
the team will also be reinforced by cyclists from junior ranks. New
additions to the team are Slovenian juniors Izidor Penko, who placed 6th
at last year’s Men’s Junior World Championship, Jure Stepišnik and Žan
Kovač, while joining us from other teams are Žan Jerkič, Grega Krajnc
and Robi Jenko. The team is one of the youngest in the world.

Marko Polanc, manager and coach of the men’s continental team Radenska,
puts the focus on the training of young cyclists by saying: “With our
young team we will continue striving towards the goals set last season.
We will focus our efforts on the upbringing and education of young
cyclists as well as their athletic and personal growth. Our goal is to
help young talent grow and thereby show Slovenian fans and sponsors the
fighting spirit and the development of our team as a whole, which will
surely bring great results after years of hard work. On the competitive
level, we will strive towards winning the Scott’s Golden Bicycle race
and towards putting in successful results in all categorized
international races in the U23 category, as well as towards qualifying
two cyclists for the European and World Championships.”

The event was also attended by Aleš Čerin, Deputy Mayor of the City Municipality of Ljubljana, and Jože Mermal, President of the BTC Management Board.
Mr Mermal, the patron of the BTC City Ljubljana women’s cycling team,
mentioned all the efforts and investments of the BTC Company in the
development of cycling in Slovenia by saying: “Last year we wrote an
important chapter in the history of Slovenian cycling, as we added
another milestone to our rich resume, which includes organisations of
the 33rd Marathon Franja BTC City and the ARWC UWCT Finals 2014. The BTC
Company is extremely proud of the first Slovene women’s professional
cycling team, BTC City Ljubljana, which has surpassed all expectations
with its results in the first competitive season. Year by year, cycling
is maintaining and strengthening its prestigious position among
Slovenian sports disciplines, and I am certain that in this season the
cyclists will continue to enthral all of us who have been cheering for
them on their path to success.”

Another novelty in Slovenian cycling this season is the cycling
school for young girls, which will open its doors in March in the
vicinity of Ljubljana, under the mentorship of the KD Rog coaches. The
school will open in response to last year’s establishment of the first
women’s professional cycling team BTC City Ljubljana, which resulted in
the rise of the popularity of professional cycling among girls and
women. Two professional coaches will be in charge of the girls’
training. More information on the cycling school for girls and on the
training is available at www.kolesarke.si.