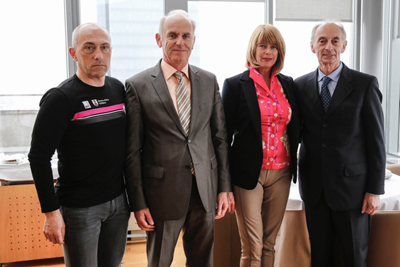 Within their all-day visit the guests got acquainted with the
course that will be hosting the prologue and the first stage of this
year’s “pink” Giro on the 3rd and 4th July.

The visit of the delegation of one of the most difficult and
prestigious races for women cyclists on the UCI calendar was organized
symbolically on Mother’s Day. Italian guests Giuseppe Rivolta, the director of Giro Rosa, his assistant Piergiorgio Severini, and RAI chronicler (also the commentator for men’s Giro) along with the filming crew were welcomed by Jože Mermal, President of the BTC Company and the president of the Organising Committee of the Giro Rosa Road Race,
together with the representatives of the remaining partners of the big
event – Slovenian Cycling Federation, Cycling Team KD Rog and the City
Municipality of Ljubljana.

Inspecting and recording the course of the first Giro Rosa stage

The delegation got acquainted with the organisation details of the
Slovene event and at the same time inspected and recorded the course of
the first Giro Rosa stage, which, after starting in Kamnik and extending
over 102.5 kilometres, will finish in the largest shopping, business,
tourist, cultural, entertainment and sports centre BTC City Ljubljana.
Based on the recordings of the course and the statements of key
representatives of Slovenian cycling there will be a short promo video
edited.

Meeting the journalists at the new BMW i3 and i8 salon in the Crystal
Palace, Giuseppe Rivolta and Piergiorgio Severini introduced the
importance of organizing the start of the multi-stage Giro Rosa race in
Slovenia. “Having a Giro Rosa stage organized outside Italy blows fresh
wind into the sails of a 25 year old tradition. After today’s visit I am
happy to say that the Slovene organizers have justified their
reputation and trust for organizing the prologue and the first stage of
such a big cycling competition by maintaining the endeavours for
developing cycling culture, women’s cycling and cycling competitions,”
said Rivolta.

The event’s host Jože Mermal emphasized that the entire organising
team will make sure to create the best racing conditions possible and
that a race on Slovenian soil will be especially motivating for the fans
of the local team. “I firmly believe our fans will enjoy the sports
event of the year. It will be a great pleasure especially for all the
Slovenian cycling fans, since we will be able to cheer proudly for the
first Slovenian professional women’s cycling team BTC City Ljubljana,
who has already filled us with enthusiasm over their excellent results
in the previous season.”

A prestigious 10-day race Giro Rosa that has been present since 1988
will unfold for the first time also on Slovenian soil this year. The
prologue of the “pink Giro” will start in the centre of Slovenian
capital in the late hours on Friday, 3rd July 2015 and continue with the
first stage of the race on the following day in the opposite direction,
following the course of the Small Marathon Franja. The prologue and the
first stage in Slovenia will be followed by 8 stages in Italy, with the
last stage taking place on Sunday, 12th July in San Domenico di Varzo.
Organizing this event surely presents a special milestone for Slovenian
cycling; it is namely a pilot project, setting the foundations for the
formation of organisational standards for future important sports events
in Slovenia.