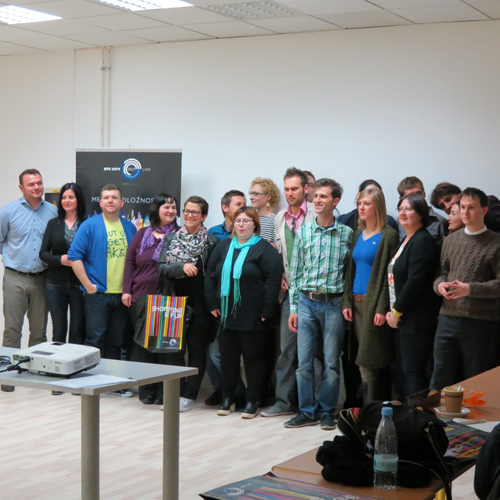 The tradition of success initiated by the Ljubljana programme, which is in its fourth consecutive year and has in the first three years of operation helped 81 per cent of candidates with finding employment or starting their own business, found its offshoot in Murska Sobota. Young job seekers under the age of 30 got an opportunity to strengthen their competencies in the field of business by attending 6 meetings amounting to 36 hours of classes. Some of them are even looking at steady employment.

The BTC Campus programme has brought freshness and additional opportunities for education into the lives of young people in Prekmurje, where in January 2016 the official unemployment rate was measured at 21.0 per cent.  Each candidate could write their own story of professional and personal growth, add to it in the course of the training and progress via diverse study cases and pieces of advice. The uniqueness of BTC Campus lies in challenging the candidates with concrete business problems and opportunities in BTC City Murska Sobota, and familiarising them with the basic skills and processes required to attain personal and professional objectives.

As the programme came to a close, Mitja Horvat, CEO of BTC City Murska Sobota, awarded the candidates their BTC Campus diplomas and encouraged them to an active career: “In the BTC Company, we have joined our mission to create new opportunities with corporate social responsibility and listened to the young, because they are the future of economic and social development in Slovenia. I am happy that, together with our partners, we have extended the BTC Campus from Ljubljana all the way to Murska Sobota and offered young people a gateway into the world of business at two different locations. We have enabled them to grow conscious of their potential, helped strengthen their self-confidence and endowed them with the courage needed for a proactive search of career opportunities or the implementation of their own business ideas.”

Candidates under the age of 30, chosen by the regional office of the Employment Service of Slovenia in Murska Sobota, had the perfect opportunity to receive useful knowledge and skills in the field of business. Lectures and workshops held in March were conducted by lecturers from the Center for Business Excellence of the Ljubljana Faculty of Economics, namely dr. Rok Stritar, dr. Blaž Zupan and Marjan Kramar.

Testifying to the success of the BTC Campus programme are impressions shared by the candidates themselves. They agreed that the programme offered them a different view of the environment. They realised that it is not inaccessible; there are diverse opportunities available to them, if only they want and know how to exploit them. One such opportunity is the BTC Campus and the candidates showed a great deal of willingness for active participation and a desire to change their patterns of setting and reaching goals. Some focused on starting their own business while others were dedicated to finding a job. The BTC Campus gave them the hope and audacity to be more courageous in seeking career opportunities, which already paid off in some cases.

Since March, concurrently with the BTC Campus organised for 30 young people in Murska Sobota and inviting the same number of participants, the programme has also been underway in Ljubljana. This year’s BTC Campus is thus the first one to offer help in a time of bad economy to no fewer than two groups of young people at two different locations, altogether encompassing 60 candidates. It is a model example of connecting academia, the industry and the state, while it also positions the BTC Company as a responsible agent and creator of developmental opportunities for young people as the generators of the future development of Slovenia.