The buzz in town – urban bees 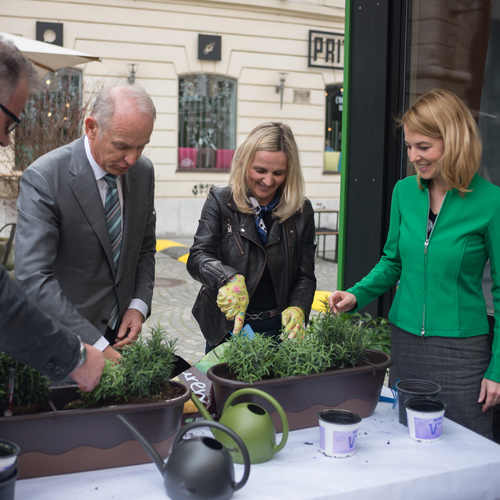 Vice-mayor of the City of Ljubljana, Tjaša Ficko, emphasised that Ljubljana is the proud holder of the title European Green Capital 2016 and that the city is successful in pursuing its vision of sustainable development. “In this respect, the cooperation with a diversity of stakeholders is vital, especially with those who are open to new ideas and are brave enough to implement them. The BTC Company is one of them. This project proves that the city lives and breathes with nature and that each and every individual can make seemingly small steps to contribute significantly to a higher quality of life in the city.”

Within the framework of the BTC Company’s sustainable strategic vision Mission: Green, and as part of the objectives set by the City of Ljubljana, in April this year’s European Green Capital will witness the beginning of the campaign “Pomagajmo čebelici v mestu – Ocvetličimo okna in balkone” (“Save the urban bee – plant flowers on your windows and balconies”), which will urge the citizens of Ljubljana to contribute to the preservation of the native Carniolan honey bee and its complex, incredibly important role in nature.

Jože Mermal, President of the BTC Management board and a big fan of nature himself, trusts that the campaign will reach many people: “We grow increasingly aware that the expression “back to nature,” coined by Jean-Jacques Rousseau in the 18th century, carries great weight, be it with regard to food, air, the environment in general, or all those animal species without which the world would be impoverished in the extreme – if the bees became extinct, humanity would follow them in a matter of four years. Within the scope of our campaign, we put up a beehive on the premises of BTC City in 2014 and organised the “Bee-friendly school” contest in 2015, which saw primary school Medvode being rewarded with an educational beehive. This year, we ask all who hold nature, bees, and honey dear to their heart to help the urban bees – and as they help save the bees by planting melliferous flowers, they will also make their homes and the entire capital of Slovenia come into full bloom.”

On April 9th, the citizens of Ljubljana can familiarise themselves with the objectives of the European Green Capital and the Ljubljana Bee Trail, which came to life last year and is supposed to bring as many bees as possible to the city. Attendees will also receive seedlings and seeds of melliferous balcony plants, with which they can beautify their windows and balconies, as well as advice on their cultivation.

Anže Voje, the public relations representative of Merkur, one of the project partners, gives a vivid account of the advantages of melliferous plants on individual balconies and windowsills: “For 120 years, Merkur has helped Slovenian customers create better homes and gardens, so we were more than happy to aid in this campaign. With plants on balconies and windowsills we want to contribute to the green heartbeat of the city and the care for bees in an urban environment. The rich selection of products on offer in Merkur’s garden centres enables anyone to create their own green corner on their balcony or windowsill. What can be better than fresh basilica leaves in your tomato salad? Or some fresh thyme on the steak? And all that straight from the little garden on the windowsill, which also helps save the bees and the precarious natural equilibrium. As part of the campaign, Merkur has prepared a wide selection of seeds and seedlings of melliferous plants. Between 11th and 24th April 2016, all herbs and spices will be available at special discount prices. Melliferous plants are those that excrete large amounts of nectar when in bloom, or produce enough pollen for the bees to collect. Bees are the fountain of life for plants as well as for people. They perform the crucial role of pollinators. Everyone who plants a melliferous plant contributes to the well-being of people and animals, and just helps the city breathe better.

In cooperation with MiniCity, where afternoon open-door workshops will be organised as part of the campaign “Save the urban bee – plant flowers on your window and balcony,” the project to save the Carniolan honey bee is also aided by kindergartens and schools, which have expressed great enthusiasm for the campaign. The whole week long, they will hold thematic workshops focusing on bees, honey production, and melliferous plants, visit the beehive in BTC City, and try to spruce up their kindergartens with melliferous plants.

The CEO of MiniCity Ljubljana, Miha Culiberg, is very happy about this turn of events, since MiniCity is also committed to educating children about the environment: “We are glad that the BTC Company and the City of Ljubljana have invited us to work on this project. In MiniCity, the city for children, we organise activities throughout the year which encourage our young citizens to act responsibly toward the environment. Between 11th and 16th April, our nature preservation activities will focus on workshops, which will familiarise children and their parents with the importance of bees for our lives and teach them how they can help protect the bees.”

All who want to add a piece into the mosaic of saving the Carniolan honey bee are invited to attend the educational and commercial event at the BTC City Market on April 16th, where they can get acquainted with the Bee Trail and other, concomitant plans of Turizem Ljubljana, as well as the strategic orientation of the European Green Capital and its project partners, such as Merkur, Semenarna/Kalia, Hofer, MiniCity, and others, who will sell seedlings and seeds of melliferous balcony plants as well as give advice on how to grow them. Dates and times for guided tours of the BTC City beehive will also be published.

Iztok Verdnik, Head of the department for corporate communication and marketing at Semenarna Ljubljana, looks forward to giving professional advice to visitors in attendance and helping them choose among the melliferous plants available: “Melliferous plants are important for the life of bees and everyone can help save the bees and other pollinators by planting them in their garden. Garden centre Kalia offers a wide selection of flower and herb seeds, as well as seedlings of decorative trees, annual and perennial plants, which will invite bees to your garden.”

Some two years ago, the company Hofer also decided to start actively drawing attention to the importance of bees with the project “Skrbimo za medeno prihodnost” (“Ensuring a honey-sweet future”), which facilitated the construction of an educational beehive. Lejla Helbl, Head of communication and corporate social responsibility at Hofer, adds: “Without bees our food would be bland and impoverished, we would be unable to taste many products which we at present take for granted, nature would fade in its colour and stop giving us its fruits come autumn. Bees are vital in ensuring our future existence, which is why Hofer, in cooperation with the Slovenian Beekeepers’ Association, seeks workable solutions in beekeeping and conducts pollen research in Hofer’s educational beehive, which was set up in the managerial and logistics centre of the company and houses twenty-one bee families. The findings proceeding from years of research are relevant to apiculture not only in Slovenia but also worldwide. To raise awareness, we enter into a number of partnerships, which is why we were more than happy to support BTC City and the City of Ljubljana in the project “Ocvetličimo okna in balkone” (“Plant flowers on your windows and balconies”). By spreading the seeds of melliferous summer plants and spices we can ensure that the windows and balconies of our customers will look sweet indeed.”

Spring is in full bloom in May, and every year on May 20th we celebrate the World Bee Day. Our celebration on this date will include the ceremonial opening of an exhibit at the Ljubljana Castle and the official start of the contest for Ljubljana’s prettiest window and balcony decorated with melliferous plants. The contest will close in July, when 10 finalists will be chosen by popular vote, whereupon a jury consisting of a landscape architect, a representative of the City of Ljubljana, and a representative of the BTC Company will declare the winner as part of the event “Ljubljana, European Green Capital 2016.”

Ljubljana will become not only a city that is friendly to its native Carniolan honey bees, but also the most beautiful city around, full of fragrant windows and balconies, a city we can all be proud of, a model to other capitals across the world, which is more than justified in being called European Green Capital 2016.

An urban oasis for bees

Slovenia is the only European country where the native bee is protected. Due to its status as an endangered species, care for its preservation is all the more important. Bees are disappearing as a result of a variety of factors, ranging from climate change to environmental pollution and the use of pesticides. The latter are particularly dangerous, since, despite the minimal concentrations, long-term use implies the annihilation of many bee families, and with them also many other animal and plant species. Pesticides which endanger the existence of entire bee families can be found on agricultural land in rural areas, which is why moving bees into cities is more than sensible. Pesticides in cities are basically non-existent, and chemical analyses of the honey produced by urban bees testify to the purity and high quality of their honey and other side-products.

Petra Kalan Lubajnšek, head of business development at the company Medex, welcomes urban bees and beekeepers, as well as the idea of citizens aiding the bees: “Since 1954, Medex has cherished hardworking bees and preserved as well as enriched the tradition of beekeeping, collecting honey and other gifts of nature. We are aware that wherever there is life, there are bees. We were therefore happy to join the project “Pomagajmo čebelici v mestu – Ocvetličimo okna in balkone” (“Save the urban bee – plant flowers on your windows and balconies”). Bees are the most important pollinators of plants, since as much as a third of world food production depends on them, and they are also very precise indicators of environmental conditions. With their products, such as honey, royal jelly, pollen etc., bees care for high nutritional diversity and the safety of us all. Join the campaign and let us all together save the bees. May care for the bees become the responsibility of each and every one of us.”

This year’s campaign is a continuation and upgrade of the 2014 project “Save the urban bee,” which first presented the idea of moving bees to the city in an organised manner. In the past couple of years, Ljubljana has become home to quite a few urban beehives, private ones, as well as ones set up by companies and especially kindergartens and schools. But we must still strive to help the bees so they may have enough nectar and pollen to collect. By planting melliferous plants, which are native to boot, everybody can help the bees and the environment in a simple and neat way, not only enthusiastic beekeepers. That way, we care for the preservation of the Carniolan honey bee and our native plant species, while also helping the city come into full bloom.

Urban beekeeper Franc Petrovčič adds: “Raising the number of melliferous plants in urban environments is one of the wishes and fundamental objectives of the Society of Urban Beekeepers, since this would have a positive impact on our native Carniolan honey bee and its honey production, as well as on some ten species of wild bees living in the city, bumblebees, and other important pollinators.

This year, our country came in at the bottom of the list of the five most green countries in the world. Together we can make sure that Slovenia will rank higher next year.