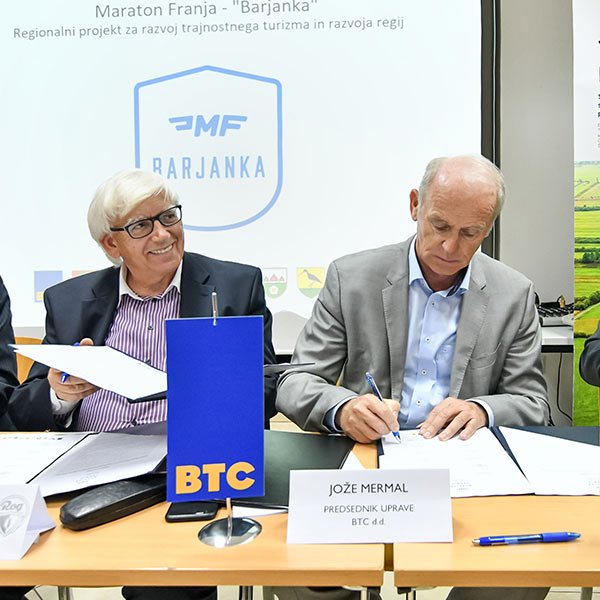 Yesterday, the BTC Company, Cycling Association KD Rog, the Ljubljana Marshes Nature Park, Ljubljana Tourism, and seven Ljubljana Marshes municipalities signed a letter of intent, with which they reaffirmed their cooperation in the organisation and implementation of the cycling event “Barjanka”, as well as its inclusion in international tourism races in the scope of Marathon Franja BTC City. The first such tourism-oriented recreational cycling event is planned for 9 June 2018.

The Ljubljana Marshes Nature Park is a suitable location for the organisation of a cycling event due to its adequate road infrastructure, its location in the vicinity of Ljubljana, its varied landscape, and its cultural and natural heritage. The emphasis of the “Barjanka” course falls on having a good time with fellow cyclists, as well as getting to know the environment, the local particularities and customs. The project partnership emerged from a common wish for the public at large to become acquainted with the Ljubljana Marshes as sustainably and comprehensively as possible. Riding around the nature park, participants will be able to reminisce of the first bike races, which took place on gravel roads. In addition, the organisers are also planning a side event in the form of a cycling fair.

Signing the letter of intent, Jože Mermal, President of the BTC Management Board, said: “BTC has been a supporter of Marathon Franja BTC City for more than 15 years. In cooperation with our partners, we always strive for new content. One such new feature this year is the “Barjanka” course, which flows through the green, active, and healthy Ljubljana Marshes, and which we warmly recommend to anyone who wants to spend some free time on the bike in the scope of the greatest festival of cycling in Slovenia. We want cycling along the “Barjanka” course to become a traditional event of Marathon Franja BTC City, with notable international participation.”

Aleks Štakul, President of KD Rog, said: “Cycling Association KD Rog has a tradition spanning 69 years and prides itself on the competitive achievements of its riders in all categories on an international scale. With the support of the City of Ljubljana, BTC, and many other sponsors, this is already the 37th time that we are organising the international recreational cycling Marathon Franja BTC City, which is a part of the world marathon series. This year, as part of the three-day Slovenian festival of cycling and in collaboration with seven Ljubljana Marshes municipalities as well as the Ljubljana Marshes Nature Park, we will, for the first time ever, organise recreational cycling along an about 90 km long course, which boasts ethnographic, cultural, natural, gastronomic and historical landmark sites becoming of a millions year old landscape. It is our goal to include the “Barjanka” project in the international schedule of recreational cycling events. Thank you to all the supporters who show understanding for the future development of cycling tourism, sustainable tourism, and the region as a whole.

Aleš Čerin, Deputy Mayor of the City of Ljubljana, emphasised that Ljubljana has found different ways to promote cycling among all the generations of its citizens, meaning everyday urban as well as recreational and sports cycling. They continuously add to and upgrade the city cycling infrastructure, thereby ensuring a higher degree of safety and comfortability for the cyclists. He added that Ljubljana is happy to welcome the new “Barjanka” course, which will expand the existing bike network in the vicinity of the city and further connect municipalities in the Ljubljana Marshes. “We are proud that we have made the list of the most cycling-friendly cities in the world for the second year in a row. At the moment, we rank high in the 8th place, and given our cycling activities I have no doubt that we will climb even higher in the upcoming years,” added the Deputy Mayor.

Janez Kastelic, director of the Ljubljana Marshes Nature Park, said: “We are happy that the organisers of Marathon Franja BTC City have recognised the Ljubljana Marshes Nature Park as an opportunity to organise the international recreational tourism bike race “Barjanka”. The project is supported by the local communities, the City of Ljubljana, and BTC. We are brought together by the awareness that the nature park provides an opportunity for the development of sustainable tourism, which is based on protecting nature and respecting cultural heritage. “Barjanka” will also contribute to the integration of local economies. We are convinced that it will become a traditional constituent part of Marathon Franja BTC City. In this way, we will add to the tourism of Ljubljana as well as to the broader region of the nature park.”

“Barjanka” is already the sixth course of the recreational and competitive event Marathon Franja BTC City. Between 8 and 10 June 2018, these other races will also take place as part of the event: Marathon Franja BTC City (156 km), Triglav Little Marathon Franja (97 km), the Time Trial (22 km), the Hofer Family and School Marathon for everybody (22 km), and the Vzajemna Kids Marathon (1.2 km). Franja, which will see its 37th iteration in 2018, is part of the UWCT Gran Fondo marathon world series. In its long history, the marathon hosted more than 100,000 officially registered cyclists from more than 40 countries. In recent years, attendance has exceeded 7,000 cyclists, and the marathon has had almost 2,000 members of the organising team per year. With its longstanding tradition, the marathon is recognisable as the biggest cycling event in Slovenia, which contributes to the promotion of cycling and consequently a healthy lifestyle.

Signing the letter of intent for “Barjanka”