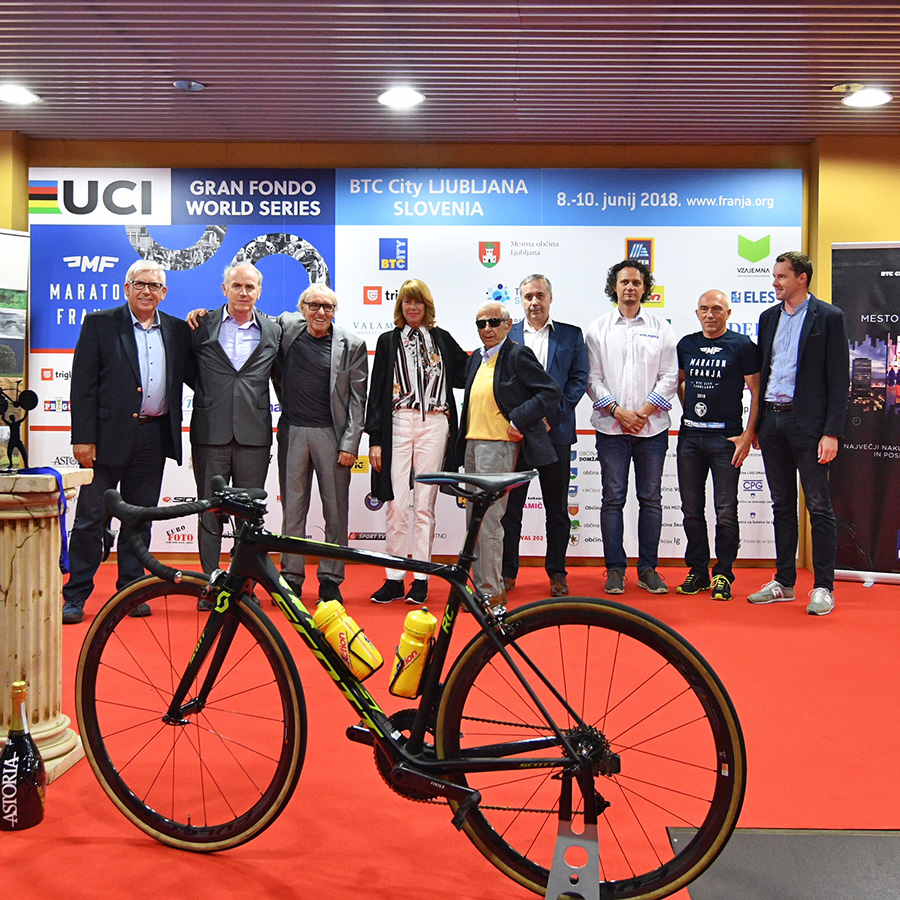 Today, the organisers of the 37th Marathon Franja BTC City presented the programme and novelties that the cyclists and the visitors of the three-day Slovenian cycling festival will be able to enjoy from 8th to 10th June 2018. Cycling Association KD Rog, the BTC Company, and the City Municipality of Ljubljana are expecting over 7,000 registered cyclists, who will be able to tackle six routes in the total length of over 380 kilometres. This year’s novelty is a tourist-sports route Barjanka, a new 83-kilometre trial.

“The Barjanka Route was planned in cooperation with the Landscape Park Ljubljana Marshes and encompasses all municipalities in the area: the City Municipality of Ljubljana and Municipalities Log – Dragomer, Borovnica, Brezovica, Škofljica, Vrhnika, and Ig. The goal of Barjanka, however, is not to encourage racing, but rather to offer the participants of Marathon Franja a tourist-sports adventure and the opportunity to discover the Ljubljana Marshes and enjoy cultural and natural heritage,” explained Gorazd Penko, Director of Marathon Franja BTC City.

“Since 2003, the BTC Company has been a great supporter of cycling. In cooperation with the Cycling Association KD Rog and the City Municipality of Ljubljana, our endeavours are to improve Marathon Franja BTC City every year. We are motivated by the dedication to this sports discipline, by respect and by the preservation of the cycling tradition, as well as numerous opportunities for socialising and business cooperation. In this manner, we will continue to strengthen the marathon’s reputation, as well as the Slovenian cycling culture,” pointed out Jože Mermal, President of the BTC Company Management Board and President of the 37th Marathon Franja BTC City Organising Committee.

Marko Kolenc, Head of Sports Department at the City Municipality of Ljubljana: “Ljubljana is a cycling city where Marathon Franja holds a very unique place. The City Municipality of Ljubljana is happy to be supporting it for a number of years; it is nice to see cyclists of all generations gather at this superb cycling event in the beginning of June. Everyone can find their own trial, but the most fascinating fact is the crowd of 4,000 participants in the Family-School Marathon. This year, Ljubljana will be proud to join the new route across the Ljubljana Marshes, which will become a new sustainable tourist route, full of natural and cultural sights, both for the people of Ljubljana, as well as the visitors of the capital.”

Despite preserving the cycling tradition, every year the marathon opens new dimensions with a rich accompanying programme, the support of the partners, a global dimension, the turnout, and the wide variety of cycling trials, as well as the energy of everyone involved. An undisturbed and safe event will be guaranteed by 60 fire brigades, 2,300 volunteers, 140 motorcyclists, 200 police officers, and several rescue teams with over 40 members of medical staff. The marathon not only presents a challenge in the sense of personnel, but also organisation-wise – a fact supported by the following data and details:

Marathon Franja BTC City represents the largest cycling event in Slovenia and is part of the world marathon series UWCT Gran Fondo. A total of more than 150,000 participants from over 70 countries of the world took part in the past 36 events, while in 2016 and 2017, the Marathon saw its European upgrade in the form of the project My Sport is Franja. With its long-lasting tradition, it contributes to the promotion of cycling and thereby a healthy way of living.