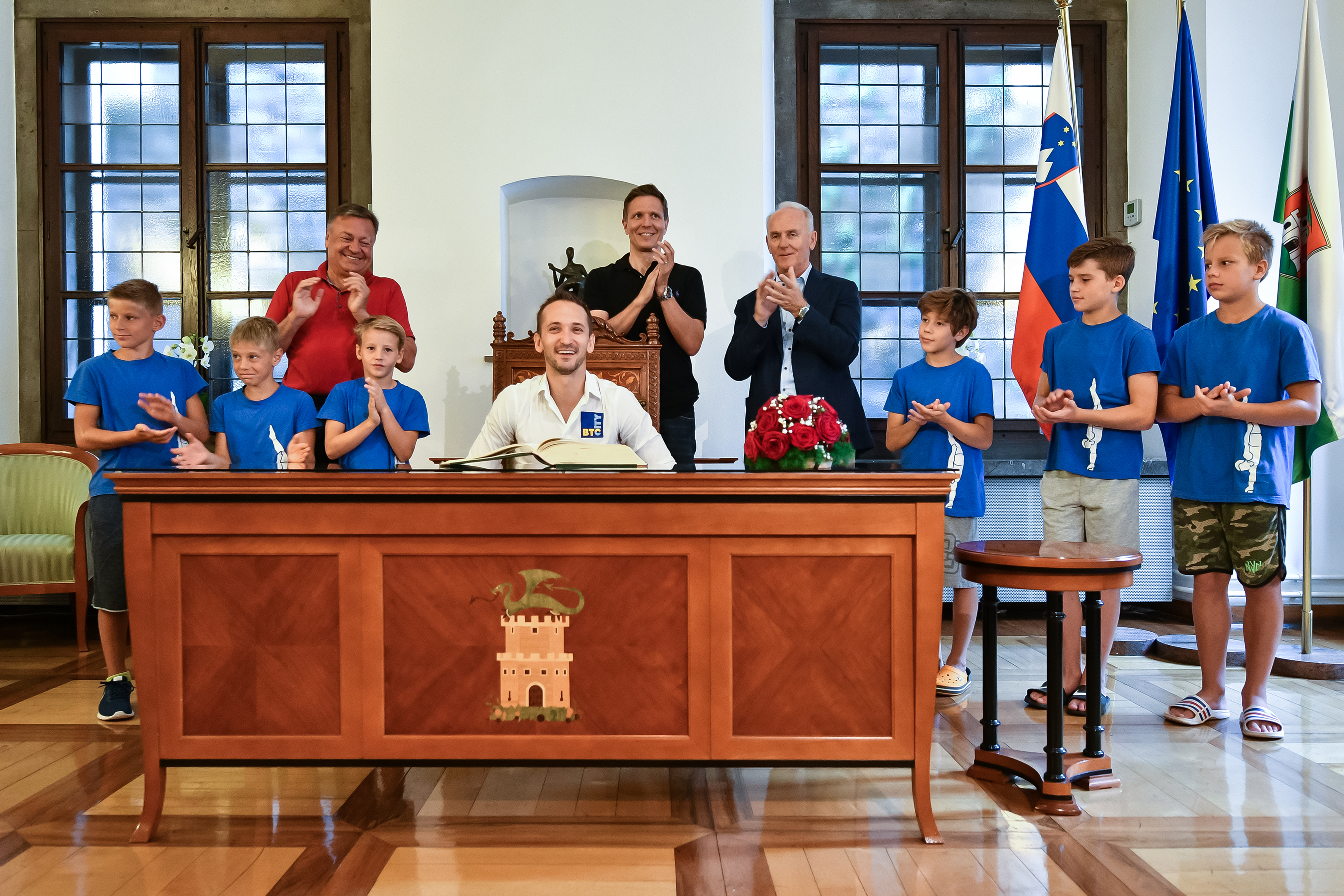 Today, the City of Ljubljana hosted a reception for gymnast Sašo Bertoncelj, who achieved the greatest result of his career the previous weekend and became the European pommel horse vice-champion at the European Gymnastics Championships, and his longtime coach Sebastijan Piletič. Upon this extraordinary achievement, the gymnast and his coach were also rewarded by the BTC Company, which has supported Bertoncelj for twelve consecutive years.

Sašo Bertoncelj scored an excellent second place in the pommel horse discipline at last weekend’s European Gymnastics Championships in Glasgow. By winning the silver medal, he achieved the greatest result of his career and became the European pommel horse vice-champion. This is the best result attained by a Slovenian gymnast at European Championships in the pommel horse discipline. Upon returning home, Bertoncelj and his coach, Sebastijan Piletič, attended a reception in Ljubljana’s Town Hall, where they were welcomed by Zoran Janković, Mayor of the City of Ljubljana, Jože Mermal, President of the BTC Management Board, and mag. Damjan Kralj, President of the Slovenian Gymnastics Federation.

At BTC, where they have supported Bertoncelj’s extraordinary career for more than 11 years, they decided to additionally reward the gymnast for his outstanding achievement. Jože Mermal handed him a reward in the amount of EUR 3,000 and his coach a check in the amount of EUR 1,000. Bertoncelj also received an electric bike and a jersey of the professional women’s cycling team BTC City Ljubljana. Sašo Bertoncelj then signed and wrote in the commemorative book of the City of Ljubljana, whose pages hold the impressions of extraordinary individuals.

Upon the reception, Jože Mermal, President of the BTC Management Board, said: “At BTC, we are proud to have supported the extraordinary career of Sašo Bertoncelj, who has inspired us with achievements such as this European silver medal, for many years. His hard work and dedication to the sport prove that one can achieve even the most ambitious goals by being persistent and dedicated. We are happy that by supporting the Slovenian Gymnastics Federation, for more than 20 years now, we enable Bertoncelj and other gymnasts to train without interruptions and compete at the highest level. This way, they can achieve excellent results and win medals.”

Sašo Bertoncelj, who was more than happy with his result, said: “As I accept all these congratulations, I slowly begin to comprehend how great my achievement truly is. I am really happy and still have trouble sleeping because of all the adrenaline. I want to take this opportunity to thank my longtime sponsor, BTC, which has been by my side my entire career, whether my results were good or bad.”

Heeding its social responsibility, BTC supports numerous athletes and sports organisations, who successfully compete on the national and international level. As longtime supporters of Slovenian gymnastics, they annually sponsor the Slovenian Gymnastics Federation as well as individual gymnasts. They also advocated the opening of the Ljubljana Gymnastics Centre. The bond between the company and Slovenian gymnastics became even tighter at the end of last year, when mag. Damjan Kralj, board member and marketing director at BTC, was elected President of the Slovenian Gymnastics Federation.

BTC does not show its love of sports only through gymnastics. In cooperation with the City of Ljubljana, it also spreads the culture of sports by promoting cycling. Its support of this discipline is put on display every year with the organisation of Slovenia’s biggest celebration of cycling, Marathon Franja BTC City, the company was instrumental in the 2014 foundation of Slovenia’s first professional women’s cycling team, team BTC City Ljubljana, and so on. Through its support of various sports, BTC helps raise awareness of the importance of an active lifestyle and strengthens the culture of sports in Slovenia.