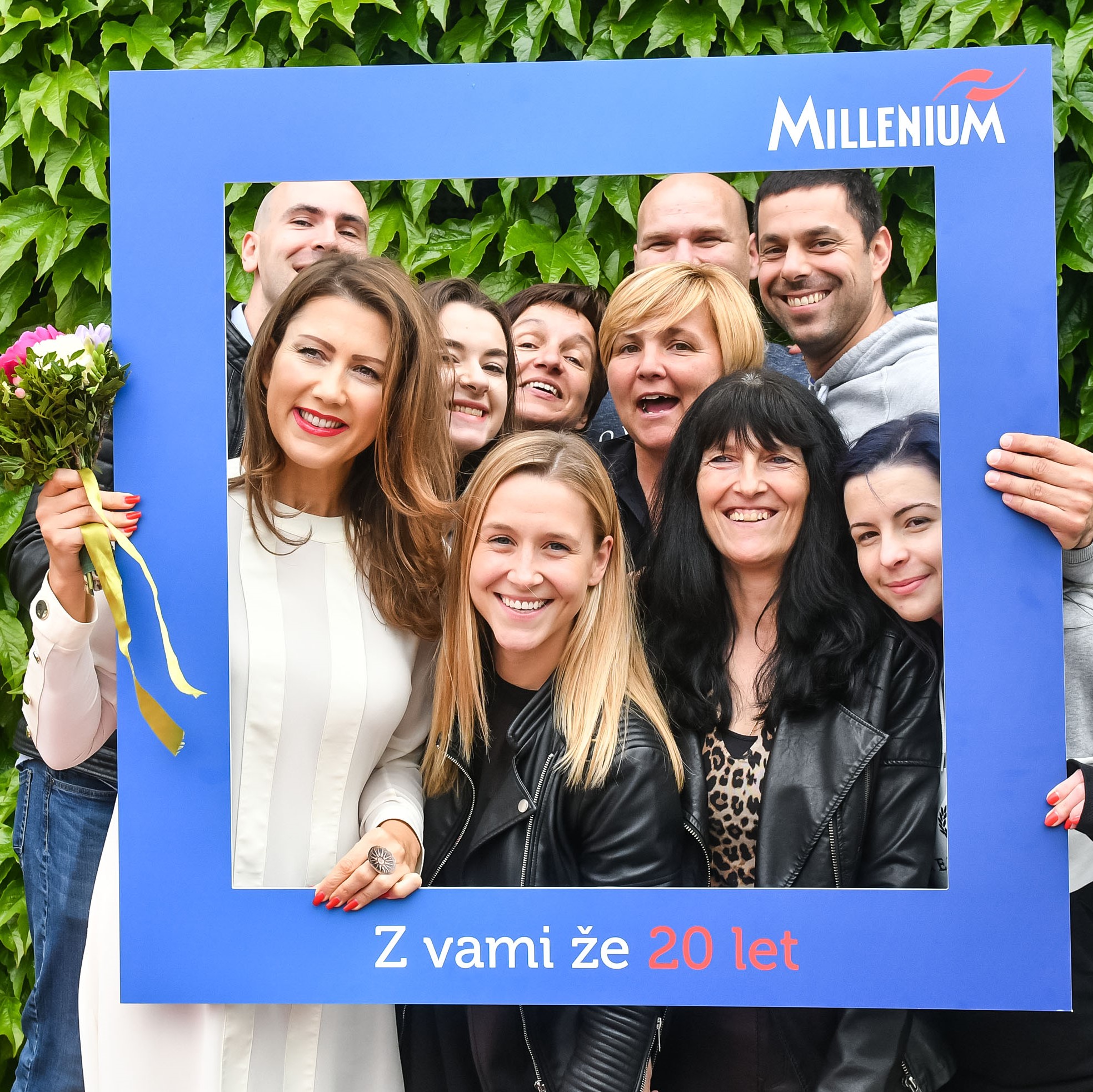 This year, Sports centre Millenium (ŠC Millenium) is celebrating its 20th anniversary. Yesterday, they marked their anniversary by hosting a sports and social event, with which they wanted to thank and mingle with everyone who helped them co-create successful sports stories over the past twenty years. These stories were written through numerous tennis and other sports events, fitness upgrades and relaxation offers, all together contributing to the development of ŠC Millenium into a top sports centre.

The ŠC Millenium story began in 1999, when two top tennis players of that time, Justine Henin and Katarina Srebotnik, opened the most modern sports centre in Slovenia with a tennis match. Later on, Justine Henin went on becoming world number one and a winner of seven Grand Slam tournaments. Over the past twenty years, the sports centre hosted numerous sports events, among them in 2006 also an exhibition match between the Swedish tennis legend Stefan Edberg and his Slovenian opponent Blaž Kavčič, followed by a doubles match with Mima Jauševec, Tina Križan and Iva Majoli. Today, ŠC Millenium is a top-notch sports centre, which offers its visitors saunas, fitness, tennis courts and additional offers to enjoy and relax. It connects 1,100 active members and is visited by 350 visitors daily.

At the anniversary event, tennis players played randomly picked doubles matches, while other sports enthusiasts enjoyed playing darts and fun sports animation. Everyone had the opportunity to indulge in a birthday cake and musical entertainment.

Upon the anniversary, Jože Mermal, President of the BTC Management Board, pointed out: “With its offer of sports and relaxation programmes, suitable for visitors of all generations, ŠC Millenium significantly supplements the offer of BTC City Ljubljana, adding to it a sports vibe. By supporting numerous athletes, organisations and events, the BTC Company encourages sports activities and active spending of free time. We are especially pleased and proud to offer our visitors a wide array of sports activities, provided by ŠC Millenium.”

ŠC Millenium, known for its orderliness, cleanness, hospitability, and professionalism, provides its visitors the most modern tennis hall with a carpet and granulated court, five tennis courts with top lighting and a fitness centre with modern Precor equipment, following the trends of the fitness industry. The fitness centre provides guided workout, individual recreational workout, workout for young athletes with the emphasis on physical preparation, a programme for managers, workout for seniors, workout 1-on-1, rehabilitation, and a morning training session Active morning (“Aktivno jutro”). With their advice, help, programme preparation and individual workout, professional and trained coaches are available to all the visitors on a daily basis.

ŠC Millenium offers six saunas, a possibility of renting a VIP sauna, an outdoor pool, various therapies, while the additional offer is supplemented with the tennis shop S šport, a massage and beauty parlour Center terapij and bar Millenium. For ten years, ŠC Millenium has been home to Katarina Venturini’s dance school Plesna zvezda, while the shop Benetton is a welcome addition to the offer since 2014.

Every year, ŠC Millenium hosts numerous resounding events, e.g., a 24-hour fundraising cycling event with ultra-marathon cyclist Marko Baloh, taking place this year for the 14th time, the Journalists’ Championship and the National Veteran Tennis Championship, as well as different VIP tournaments. ŠC Millenium is also the venue of the tournament for the youngest Let’s play tennis! (“Igrajmo tenis!”) and the organiser of the traditional tennis Tournament of Legends, where each year top Slovenian skiers, basketball players, handball players and soccer players participate. To name a few of them, present were Tone Vogrinec, Bojan Križaj, Jaro Kalan, Tomaž Cerkovnik, Primož Ulaga, Ivo Daneu, Peter Marter, Pavle Polanec, Srečko Katanec, Vili Ameršek, Brane Oblak, Vlado Bojovič and others. One of more resounding projects was also the Millenium Challenge (“Millenium izziv”) which was realised three times between 2015 and 2017, with the participants melting away their excess body weight and transforming their bodies. Being a part of it were also known Slovenians Werner, Salome, Luka Sešek, and Ana Dolinar Horvat.