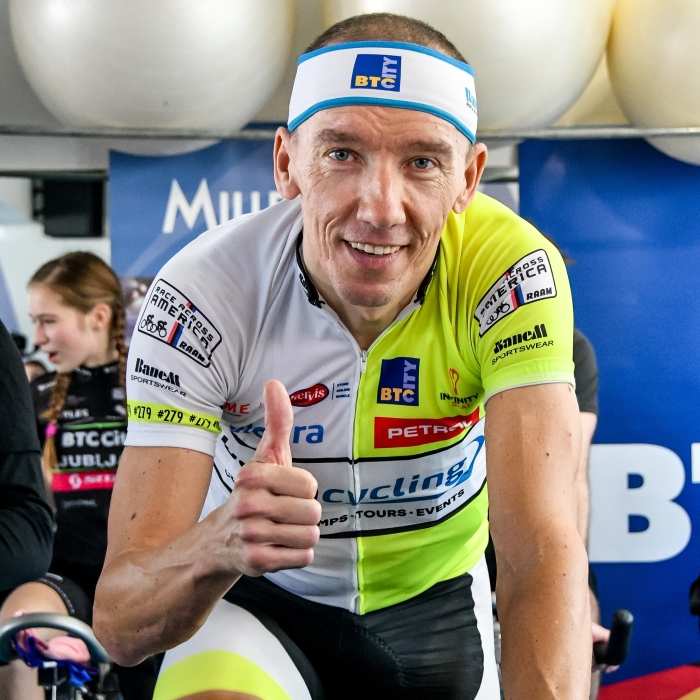 Last weekend, Slovenian ultra-cyclist Marko Baloh mounted his bike for charity for the fifteenth time in a row. On Friday, January 24, at 12 o’clock he started his annual 24-hour cycling challenge in BTC City’s Sports Centre Millenium. The event took place in the spirit of charity as visitors and participants collected foods with a long shelf life for children from socially disadvantaged families. Marko Baloh was joined by over 130 sports enthusiasts, who together raised more than 500 kg of food. Food collection will continue until January 31, when all of it will be donated to selected families in cooperation with the humanitarian organisation Association of the Friends of Youth Moste-Polje.

While more than 130 people pedalled on, there was no shortage of excited viewers who cheered them along – some of the cyclists rode for no less than 20 hours – and helped them conquer many kilometres. The event was also attended and supported by a number of Slovenian athletes and celebrities, including Sašo Bertoncelj, Mitja Petkovšek, Rok Klavora, Teja Belak, Tjaša Kysselef, Luka Terbovšek, Samo Jeranko, Nejc Žnidarčič, Andraž Jereb, Tim Toplak, Jure Košir, RK Krim athletes, cyclists of the BTC City Ljubljana youth team, team Radio Aktual, team Alive Step Up, and others.

At the event, Marko Baloh particularly stressed the following: “It really means a lot that I can motivate so many people to participate in charity cycling by being a known athlete. In addition to supporting my sporting career, they also help me do a lot of good for children from socially disadvantaged families. At the same time, a 24-hour training session is an important part of my preparations for the upcoming cycling season. This challenge is a winning combination of charity, exercise, and getting together with fans and supporters.” In the 24 hours of cycling, Marko Baloh rode a total of 873.9 km with an average speed of 36.41 km/h. During the ride, he drank 20 litres of fluids and took in 11,000 calories while burning as many as 14,600 calories.

The ultra-cycling challenge was held in support of the humanitarian organisation Association of the Friends of Youth Moste-Polje. The participation fees for the charity cycling challenge were collected in the shape of foods with a long shelf-life. Long shelf-life foods were also donated by fans. Over 500 kg of food was raised altogether, with food collection continuing up until Friday, January 31. The collected food will be donated to children from socially disadvantaged families.

Anita Ogulin, President of the Association of the Friends of Youth Moste-Polje: “We are grateful for all the efforts undertaken by Sports Centre Millenium, Marko Baloh, and all the event participants and viewers, who made donations to help improve the lives of children. The help and the support provided through projects such as the charity cycling challenge are incredibly important in the lives of those who have to bear the burden of poverty every day. At the same time, it is a testament to the fact that together we have the power to diminish their struggles.”

Miha Mermal, Chief Marketing Officer and Chief Sustainability Officer at BTC d. d., also cheered for the cyclists and said: “For BTC, cycling is one of the most beautiful stories we are involved in. By supporting this sport, we can make the dreams of many a promising cyclist come true (for example those of the members of women’s cycling team ALÉ BTC Ljubljana and the BTC City Ljubljana youth team), we bring joy to cyclists and fans of the sport at Marathon Franja BTC City, and we are long-time supporters of ultra-cyclist Marko Baloh. But we are particularly happy when our involvement helps improve the lives of young people, which is why it is our pleasure to support the 24-hour cycling challenge with Marko Baloh every single year.