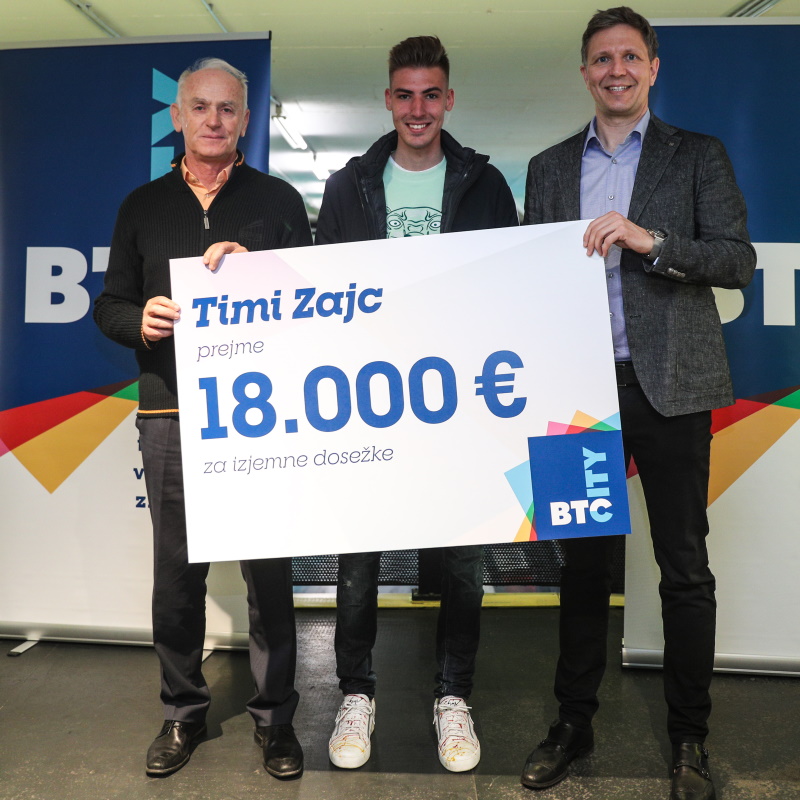 The name Timi Zajc will be forever written with capital letters in the history of this year’s recently concluded ski jumping season. That is why the BTC Company, which has supported Timi for five years already, gave him a warm welcome to celebrate his outstanding season in BTC City’s WOOP! karting centre. In a relaxed atmosphere, Timi was shown just how proud we were of all of his remarkable achievements at the World Championships and in the World Cup in 2022 and received a cheque in the amount of EUR 18,000. Timi then took to the WOOP! karting track and also demonstrated his non-ski-jumping skills.

This season, Timi Zajc was exciting to watch without fail, taking the fans’ breath away with one marvellous performance after another. He stood on the Olympic podium twice in team events. At the FIS Ski Flying World Championships in Vikersund, he won two medals – silver in the individual event and gold in the team event. Looking at World Cup competitions, he won a total of eight medals at individual and team events in ski jumping and ski flying – one of them at home in Planica, where the guys were spectacular in front of an audience of ten thousands of fans and won team gold. For Timi, just as for other Slovenian male and female ski jumpers, this was definitely one of the most successful seasons ever.

Damjan Kralj, M.Sc., CEO of the BTC Company, Jože Mermal, Chairman of the Board of Directors of the BTC Company, and Miha Mermal, Chief Marketing and Sustainability Officer at the BTC Company, welcomed Timi in the WOOP! karting centre, honoured him for his unforgettable performances and presented him with a cheque in the amount of EUR 18,000 for his remarkable achievements at the World Championships and in the World Cup in 2022. After the award ceremony, the reception continued in the spirit of sports. WOOP! organised a karting race for all event participants, where Timi showed that he’s proficient not only in the air but also on the karting track.

Timi and the BTC Company, which has sponsored Timi for no less than five years, are living a veritable ski-jumping dream. The BTC Company is well aware of how much hard work goes into achieving these extraordinary results and just how important a sponsor’s support really is. This includes providing the necessary motivation whenever it’s in short supply, improving training conditions and enabling the development of young ski jumpers into majestic golden eagles.

In the coming year, the BTC Company will be supporting the ski-jumping club SSK Ljubno BTC for the thirtieth year in a row already; the club is known for developing aspiring young ski jumpers (both men and women), including Timi. In addition, the company is a loyal supporter of women’s ski jumping – helping to bring Slovenian ski jumpers from Ljubno all the way to a gold medal in Beijing – and has been the general sponsor of the Ljubno FIS Ski Jumping World Cup Women for eleven years. With its support of ski jumping, the company contributes to the overall development and promotion of the sport as such, as well as to the popularity of recreation and an active lifestyle.