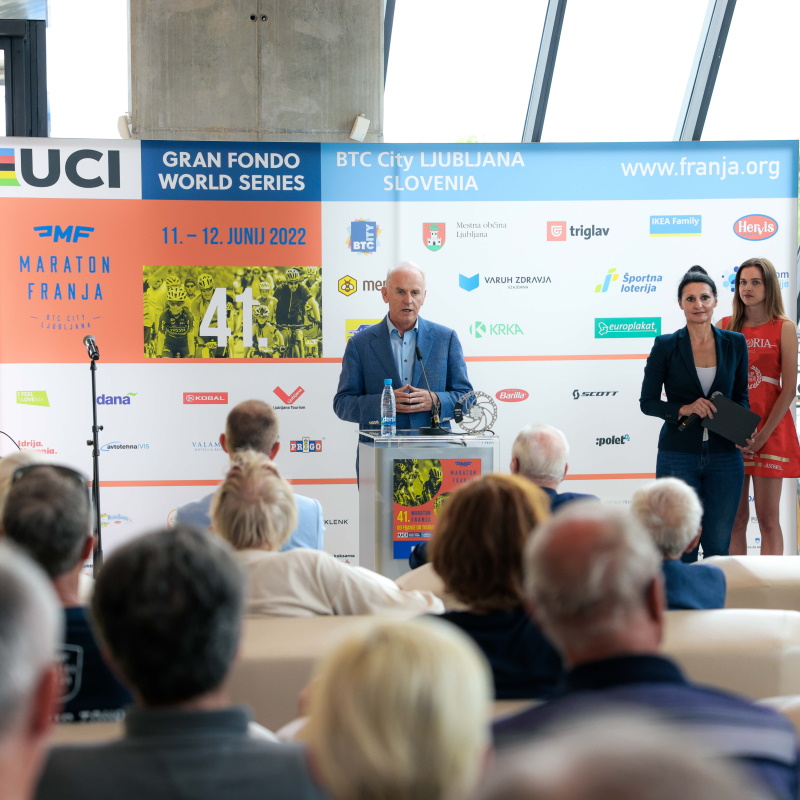 At today’s press conference, the organisers of Marathon Franja BTC City, namely cycling club KD Rog along with the BTC Company, the City Municipality of Ljubljana and other partners, announced the 41st edition of the popular marathon which will take place on 11 and 12 June 2022. After being carried out with certain limitations for the past two years due to Covid-19 restrictions, this year’s Franja will once again be “its good old self”. Between 5,000 and 6,000 participants are expected by the organisers along the five routes of the marathon. Upon the 41st edition of the marathon, the BTC Company will mark its already 20th year as the general sponsor of this cycling festival.

Marathon Franja BTC City is one of the biggest cycling events in Slovenia which transcends the borders and attracts people from far away. This sports and recreational event first took place in 1982 and became part of the UCI Gran Fondo World Series of marathons in 2010. This year, with the marathon’s 41st edition, which will make sure the roads are full of sports enthusiasts on 11 and 12 June, cyclists will once more tackle the five different routes that will be categorised according to different skill levels. The biggest enthusiasts are welcome to participate on the 156-kilometre route of the Marathon Franja BTC City. Following in difficulty level with 97 kilometres will be the Triglav Little Marathon Franja. A large part of its route takes place on the route of the original Marathon Franja. Opting for Barjanka Hervis, cyclists will experience a 72-kilometre panoramic ride that will take them on a journey across the Ljubljana Marshes. Families with kids, school children and cycling beginners can join the 21-kilometre route of the IKEA Family Marathon. We haven’t forgotten about the youngest, who can participate in the Vzajemko Kids’ Cycling Challenge by riding on a 1200-metre circular route on the Slovenska cesta road.

“From Franja to the Tour” will again be the motto of this year’s marathon, and its essence could not be described more perfectly. Franja represents the stepping stone for the Slovenian cyclists and this is the reason why it is called “the cradle of the Slovenian cycling champions”. It also plays a very important role in the development of women’s cycling and is proud to see more and more women cycling every year. One third of participants in each of the events at Marathon Franja are women. After two years of the marathon being carried out with restrictions, the recreational and professional cyclists’ desire to push the pedals is even greater. Testifying to this statement is the number of applications for this year’s marathon. To this day, there are already 2800 cycling enthusiasts who applied for one of the five events.

The 41st edition of Marathon Franja is especially important for the BTC Company which this year marks its already 20th anniversary of being the marathon’s general sponsor. Jože Mermal, President of the Marathon Franja BTC City Organising Committee and Chairman of the Board of Directors at BTC, said upon the announcement of the marathon: “A year has passed and it gives me the greatest pleasure to be here again to announce the 41st Marathon Franja as we also celebrate the 20th anniversary of the BTC Company standing behind this incredible cycling event as the general sponsor. I am especially glad that upon this anniversary, we can once again look forward to the ‘good old’ Franja. After two years of Covid-19 restrictions, we will finally experience Franja’s loving spirit in all its glory as we will once again feel the power of connection, persistence, ambition and love of sports and nature. Friends of cycling in Slovenia and all over the world, you are welcome to come, enjoy and win in Slovenia with us on 11 and 12 June.”

Gorazd Penko, Marathon Franja BTC City Director, said that he cannot wait for 11 and 12 June to finally arrive, because the energy of participants at Franja fills him with motivation and brings meaning to his work. “Every time I think about Franja’s beginnings and the powerful progress it has seen in 41 years, I feel exceptionally proud. From a simple event with 700 visitors to the Slovenian cycling festival with ten times the visitors! Franja’s soul is one of a true athlete – persistent, enduring and powerful. However, it would not be what it is today without the strong willpower of all the organisers, partners and volunteers. I thank everyone who help create this unique event and safely escort thousands of friends of cycling on the routes of Marathon Franja,” added Gorazd Penko.

Andrej Hauptman, President of cycling club KD Rog, shares the pride when it comes to Franja’s successful realisation: “I could not be happier to see Franja take place with no restrictions which over the past two years indeed hindered our efforts but nonetheless did not stop us. Just like before, Franja will present herself in the best possible way also this year. I am proud of our club, sponsors and organisers who never back down, regardless of the obstacles in front of them, and contribute to the development of our dear Franja. Every individual who is part of Marathon Franja adds their piece to the cycling mosaic. Every one of them deserves compliments and respect. Slovenians are a nation of sporty people which is why this type of event deserves top-level organisation and attention. Each year, Marathon Franja is better, especially ever since it has been taking place in BTC City. Given the members of the organising committee, I have no doubt about Franja’s further successful development. To all the cyclists who will celebrate cycling with us, I wish they enjoy the roads closed for traffic, since this is a true privilege in this day and age. I also wish they look out for their fellow-cyclists and take care of their own safety,” he added.

Up to this day, Marathon Franja BTC City’s 40 editions hosted over 150,000 officially registered cyclists from over 80 countries, which included over 23,000 women cyclists. Even during the pandemic, Franja persistently fought through the storm, since it saw successful realisation in both years, despite the restrictions. The attendance over the last few years – with the exceptions of 2020 and 2021 – exceeded 7,000 male and female cyclists, 100,000 fans and over 2,600 members of the organising team per year. Another encouragement can be seen in the fact that the attendance of female participants at Franja is ever growing – over the past few years (with the exceptions of 2020 and 2021), this has surpassed 25% of all the participants per year, with the organisers wishing to reach an even higher percentage this year.

“It is a well-known fact that in the BTC Company, cycling represents one of our favourite sports. We have been hosting our beloved Franja in BTC City for 20 consecutive years. We believe that during this time, it has grown to be a true movement, celebrating cycling. For us, this is the best proof of our contribution to building and strengthening recreational sports and an active lifestyle. The preparations for such a large event take exceptional involvement and support of the leading representatives and other colleagues in the BTC Company, as well as the commitment and courage of all other organisers, sponsors, partners and supporters. Franja also gives meaning to our support of women’s cycling. We support the cycling school for girls which is organised within the cycling club KD Rog under the name BTC City Ljubljana Scott and the professional cycling team UAE Team Emirates which competes in the world series WWT, where two Slovenian cyclists – Urška Pintar and Eugenia Bujak – race against the best. At the BTC Company, we are truly proud to be able to help write the story of Franja where cycling champions of tomorrow are made,” emphasised mag. Damjan Kralj, Chief Executive Officer at BTC.

You can find more on Marathon Franja BTC City and the event programme at http://www.franja.org/.