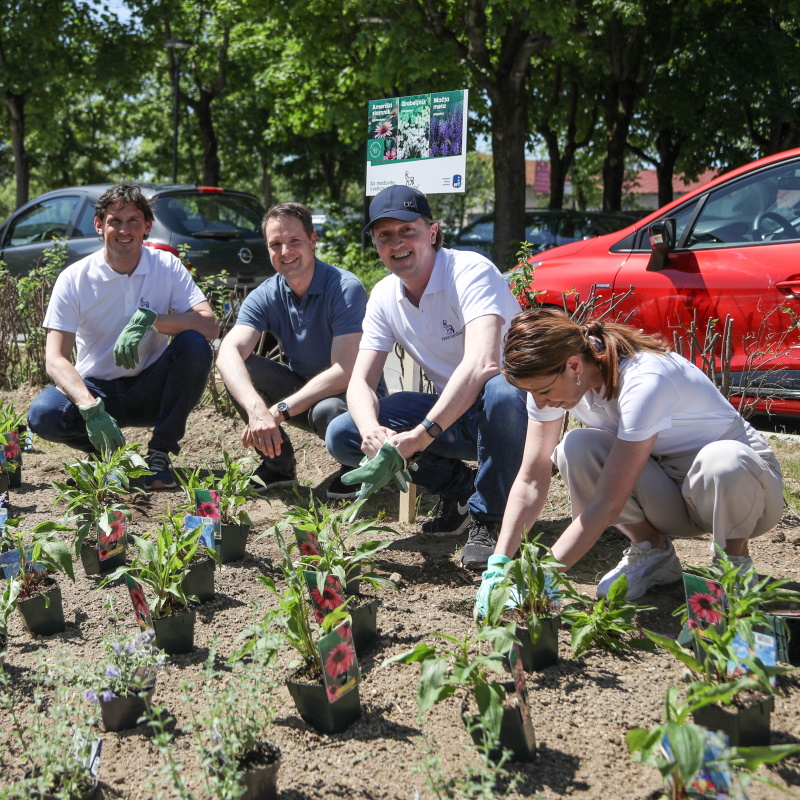 This year, Novo Nordisk Slovenija organised the planting of a new flower bed with melliferous plants in front of the BTC City Business Tower and thereby joined the “Help the bee, let’s flower up the city” project, which has been implemented by the BTC company in cooperation with the City Municipality of Ljubljana for nine consecutive years already.

A day before the World Bee Day (20th May), the BTC company and Novo Nordisk Slovenija together planted a flower bed with 120 melliferous plants in front of the BTC City Business Tower. These plants will provide bees with the much-needed pasture. By planting them, both companies wish to emphasise that there is no life without the bees and raise awareness among people about the importance of planting melliferous plants, which significantly contribute to bee pastures and gardening in an urban environment.

In cooperation with the City Municipality of Ljubljana, the BTC company has for the ninth consecutive year organised the “Help the Bee, let’s flower up the city” project. We set up an urban beehive with four bee families alongside Atlantis Water Park. The beehive is included in the Bee Path of the City Municipality of Ljubljana and is managed by beekeeper Franc Petrovčič. This year, the project also includes two other partners, Medex and the University Botanic Gardens Ljubljana, with whom we, by providing interesting contents and helpful advice, together raise awareness about the importance of bees, introduce good practices and at the same time encourage people in urban areas to flower up their window sills and balconies with melliferous plants.

Novo Nordisk, who joined the project by planting melliferous plants on new flower beds in front of the BTC City Business Tower, is a Danish pharmaceutical company, whose mission is to encourage changes in fighting diabetes and other serious chronic diseases, such as obesity and rare blood and endocrine diseases. With its sustainable development commitment, in January 2020, the company became the first pharmaceutical company which fully (100%) uses renewable electric energy at all its manufacturing locations. With the Circular For Zero strategy (circular economy for zero effect on the environment), the company embarks on its path of achieving zero effect on the environment by 2030 in all its business activities.