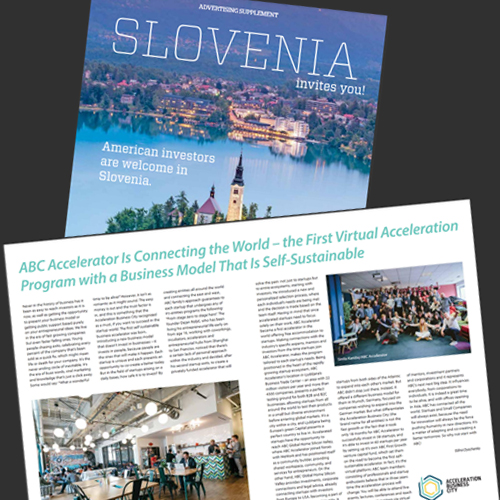 The article ABC Accelerator Is Connecting the World – the First Virtual Acceleration Program with a Business Model That Is Self-Sustainable, which was published in the special Wall Street Journal supplement Slovenia invites you!, tells the successful story of the ABC Accelerator, which was co-founded by the BTC Company. The article talks about connecting the world: from Ljubljana’s BTC City and across Europe all the way to the opening of the first European accelerator in Silicon Valley, the creation of a virtual accelerator, and the introduction of a self-sufficient business model.

The foreign language magazine Slovenia invites you! is issued by the Finance newspaper in cooperation with Izvozniki.si. The magazine is available as a supplement to foreign business media in Germany, Italy, Austria, France, Russia, Poland, the Netherlands, Sweden, Turkey, and now for the first time also in the United States of America.

The first US issue of the magazine Slovenia invites you! was published on 29 November 2016, as a supplement to the business-focused daily newspaper The Wall Street Journal. The leading daily newspaper in the US has a circulation of more than one million. The magazine Slovenia invites you! was attached to 30,000 copies of the newspaper distributed in the very heart of New York – Manhattan. In addition to a presentation of Slovenia, its tourist destinations, and innovative products, the magazine also showcases the ongoing business cooperation between Slovenia and the USA.

The ABC Accelerator occupies a central spot in the magazine – in an article that considers demanding global trends, which can quickly break any young business that doesn’t respond to them in a timely manner, and solutions developed by the ABC accelerator. The ABC accelerator in BTC City Ljubljana offers start-ups a unique environment for the testing of their products. With its offices in Munich and Silicon Valley it furthermore creates a bridge between Europe and the United States, enabling businesses to break into foreign markets and granting them access to foreign investors. It also opens doors to start-ups from all over the world, makes it possible for them to interconnect, and gives them access to information from different markets. Other special features of the ABC Accelerator include a personal approach, with programmes tailored to the specific needs of start-ups, and the creation of a virtual accelerator, which enables start-ups to globally connect with mentors, investors, and even trainings on a virtual level.

Good stories never stay unnoticed. The story of the ABC Accelerator is one more proof of this. It offers start-ups new possibilities for breaking into the global market, and puts Slovenia on the international business map.