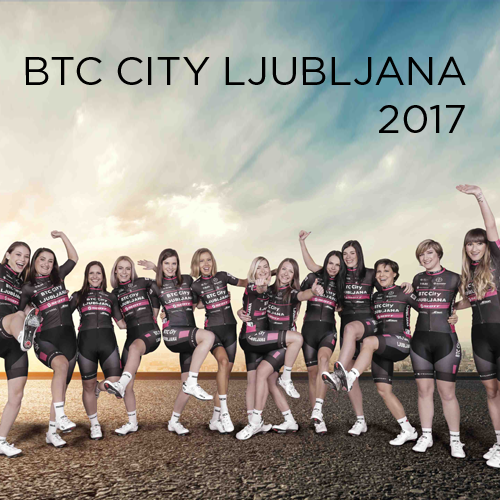 This year, six new members joined the team, which now includes 13 cyclists – seven Slovenians and six foreigners. Coming from the junior teams are Hajdi Zajc, Ula Berlan and Saša Žavbi Kunaver with reinforcements from abroad: the Italian Anna Zita Maria Stricker, the German Corinna Lechner and the Swede Hanna Nilsson. Lechner already competed twice for the team BTC City Ljubljana in the World Championship in the team event in Qatar and the USA, which convinced the team management of her abilities for this discipline. The other two representatives also drew attention to themselves in the past. Stricker came in 3rd in the Youth Road World Championship in Valkenburg, Netherlands. Nilsson was the second most successful cyclist in Swedish women’s cycling in the season 2015, with the BTC City Ljubljana team getting to know her in the previous season; however, at that time the opportunity of her becoming a member of the team could not be realised due to her knee injury which prevented her further breakthrough.

BTC City Ljubljana team will start this season by competing in the WorldTour 2017 races. The WWT event calendar with all the most important one-day classics coincides with the team’s yearly programme almost entirely. The team will also be competing in the Giro Rosa race. Due to the overlapping of Marathon Franja BTC City and the Women’s Tour in Great Britain, the team will have to skip the latter. With members of the A team, the same as last year the team will compete in some of the races of the first category. In order to gain more experience, younger team members will attend races of the second category. The racing programme includes 84 starts, which is indeed quite a lot for such a young team.

Eugenia Bujak remains the leading name in the team with her most prominent result of the season 2016 – first place in the WWT 2016 in Plouay, France. Right next to her, there are Polona Batagelj and Urška Pintar, showing more and more knowledge, experience, and great placements every year.

Fresh force to the team, Stricker, said: “Never in my life have I trained as hard as this winter – I want to become an even more important player on the world cycling circuit.”

According to the team coach Gorazd Penko, the technical knowledge she showed in the preparations with the team will be of great help to her. Mia Radotić and Jelena Erić will be able to demonstrate their qualities in easier flat stages. Radotić already showed her qualities with noticeable wins in intermediate sprints in La Course by le Tour de France 2015 and Spanish Vuelta 2016. Even the German Lechner who placed third in the European U23 Championship in Estonia wishes to show more in one-day races in time trial events.

Gorazd Penko, sports director and coach: “Looking at the overall picture, compared to last year’s team the team is a bit weaker in the team time trial race; however, they are expected to show more in more demanding races. In any case, with a bit of luck the season will show where this year’s team belongs.”

Maja Oven, director of marketing at the BTC Company and BTC City Ljubljana team director: “Women’s cycling team BTC City Ljubljana has been writing a winning story about Slovenian cycling for three years now. What we achieved with women’s professional team BTC City Ljubljana in cooperation with cycling society KD Rog, the City Municipality of Ljubljana, and other sponsors, unfortunately seems like mission impossible in Slovenian men’s cycling section. With its successful results, the women’s team BTC City Ljubljana strengthens the reputation and contributes greatly to the recognition of Slovenia in the world. Their positive energy strengthens Slovenian cycling culture, encourages an active lifestyle and green mobility, offers new business opportunities within cycling tourism and within sports equipment branch, as well. As sponsors, we continue to stand firmly behind the women’s team also in season 2017 and encourage them on their way of setting new milestones.”

The BTC City Ljubljana team is starting the season on 4th March, racing in Strade Bianche, starting and finishing in the legendary city of Siena. They will tackle 129.8 kilometres with intermediate gravel sections in the total of 28 kilometres, which the race is famous for. Last year, the BTC City Ljubljana team had no representative among the first WorldTour race point winners.