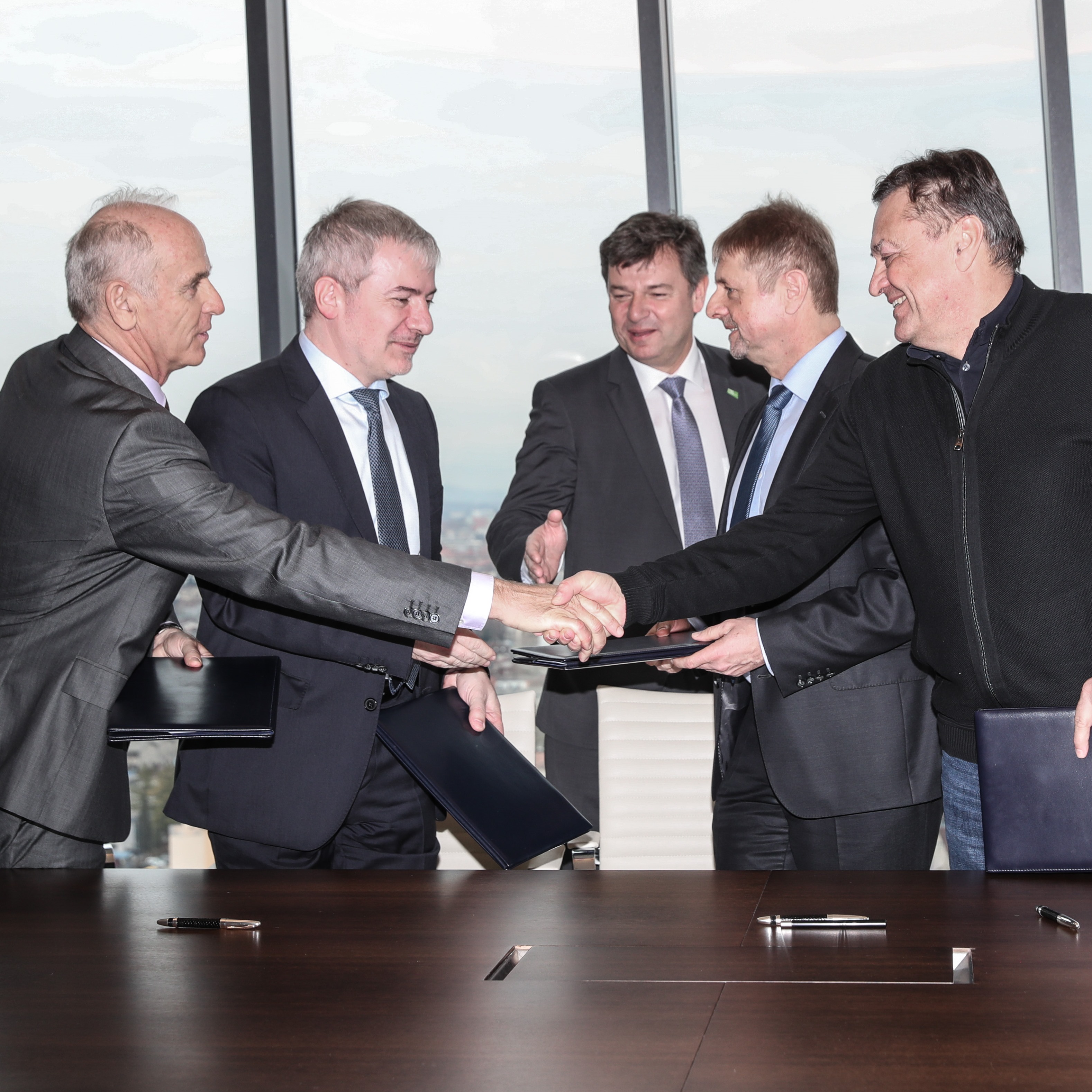 The agreement was signed by: President of the BTC Management Board Jože Mermal, Minister of Infrastructure of the Republic of Slovenia Peter Gašperšič, PhD, Mayor of the City Municipality of Ljubljana Zoran Janković, President of the DARS Management Board Tomaž Vidic, PhD, and Director of the Slovenian Infrastructure Agency Damir Topolko. The signatories acceded to the agreement with the common objective to maintain economic development in the general area of BTC City Ljubljana, which requires an immediate modernisation of its traffic infrastructure.

The agreement promises new investments as well as further development of the area’s infrastructure. This in turn ensures economic growth, new jobs, and the satisfaction of economic operators, citizens, and visitors in the entire south-eastern part of Ljubljana.

Jože Mermal, President of the BTC Management Board, said: “The signing of this agreement is an excellent example of economic cooperation among diverse stakeholders. I am incredibly happy that it has come to such a fruitful cooperation among the BTC Company, the City Municipality of Ljubljana, the Ministry of Infrastructure, DARS, and the Slovenian Infrastructure Agency. Our common objective is to accelerate economic development, stimulate business investments in the amount of EUR 300 million, create 2,000 additional jobs, and contribute EUR 30 million in taxes and social contributions. The realisation of these goals is made possible by us taking responsibility for the development of modern infrastructure in the general area of BTC City Ljubljana. We create an added value for present and future generations.”

The agreement follows the joint realisation of the signatories that new investments by domestic and foreign partners are planned in the general area of BTC City Ljubljana – investments by IKEA, Mercator, Slovenian Railways, and the BTC Company. The plan also includes the construction of the Intermodal Logistics Terminal Ljubljana, which is to cover an area of 180,000 m2 as one of the largest land terminals in Central and Southeastern Europe.

Due to the dynamic economic activity and unrelenting development taking place in BTC City Ljubljana, the area sees heavy traffic while its infrastructure capacities are stretched thin. New investments also mean additional traffic. During morning rush hour, 1,800 vehicles per hour are projected to fill the designated roads in the area, with as much as a quarter of them being goods vehicles (21 per cent). Afternoon rush hour expects this number to grow to 3,000 vehicles, 14 per cent of them being goods vehicles.

The Traffic Technical Institute of the Faculty of Civil and Geodetic Engineering in Ljubljana has prepared a study that points to a high increase of personal and goods traffic in the wake of new investments. Based on projections, experts have prepared a proposal of optimal solutions, which are focused on the modernisation and expansion of traffic connections on the roads Šmartinska cesta, Leskoškova cesta, Bratislavska cesta, and Letališka cesta. One of the objectives of the proposal is to achieve faster traffic flow from the general area of BTC City Ljubljana onto the Ljubljana ring road, and vice versa.

All in all, ten measures aimed to improve traffic have been proposed in the agreement, including the following:

The funding and realisation of individual project segments fall within the competence of DARS, the Slovenian Infrastructure Agency, and the City of Ljubljana. In accordance with the schedule, the infrastructure should be completed in its entirety by 2020, although specific works will be finished sooner.

Upon signing the Agreement on the co-development of industry projects and state infrastructure for the implementation of investments in the amount of EUR 300 million in the general area of BTC City Ljubljana, the signatories said:

Zoran Janković, Mayor of the City Municipality of Ljubljana: “The signing of this agreement testifies to the excellent cooperation between the public and private sectors. Fast economic development in the area of BTC City Ljubljana demands active participation and a willingness to take on responsibility by all the stakeholders involved, so that we may guarantee suitable traffic infrastructure. This collaboration foresees the implementation of ten projects, five of which fall within the competence of the City of Ljubljana, four within the competence of DARS, and one within the competence of the Slovenian Infrastructure Agency. I am glad that we have found a common language and listened to the experts. Entry and exit routes in and out of BTC City will be made faster and easier. I am convinced that everybody benefits from this agreement, especially citizens and visitors. I thank Mr Peter Gašperšič, the Minister of Infrastructure of the Republic of Slovenia, and President of the BTC Management Board Mr Jože Mermal and his colleagues for a constructive cooperation.”

Peter Gašperšič, PhD, Minister of Infrastructure of the Republic of Slovenia: “This agreement would not be signed if it weren’t for the excellent cooperation among all the stakeholders involved. The Slovenian government signed an agreement with the City Municipality of Ljubljana as early as last year, because we recognize the importance of these investments for the capital of Slovenia, for the creation of new jobs, for economic development, and for the area of BTC City Ljubljana itself. With the agreement that was signed today, we define the respective competences of individual investors as well as the schedule of the project. Specifics pertaining to the value of particular investments and projects will be defined in greater detail in co-funding agreements. These investments will make an important contribution to strengthening the economy in the area.”

Tomaž Vidic, PhD, President of the DARS Management Board: “We face a constant increase of traffic on our motorways. The Ljubljana ring road and its access roads are the most urgent examples of this development. Therefore, DARS has made it its mission to increase Ljubljana’s ring road traffic flow, starting with measures to be implemented at the junctions Malence and Kozarje. With the agreement that we signed today, we will also begin implementing measures to increase traffic flow at the intersections of ring road north and ring road east – an area which is already heavily burdened with traffic. We will make the necessary construction plans first. According to schedule, we will begin with their implementation, including the construction of a full access point connecting ring road north H3 with the Leskovškova cesta road, in 2019. Works will be completed in 2020.”

Damir Topolko, Director of the Slovenian Infrastructure Agency: “As the chief office in charge of managing Slovenia’s main and regional roads, the Slovenian Infrastructure Agency plans and implements its investments with an eye to supporting the economy and ensuring citizen mobility. It is important that large investments, which herald significant changes in traffic structure and flow, be coordinated among all the stakeholders in their planning stages. Only in this way can we arrive at a wholesome arrangement of a specific area and prevent traffic jams or other issues. Agreements of this sort are more than welcome, because they reaffirm that all stakeholders are aware of the importance of coordinated development and cooperation in a specific area.”