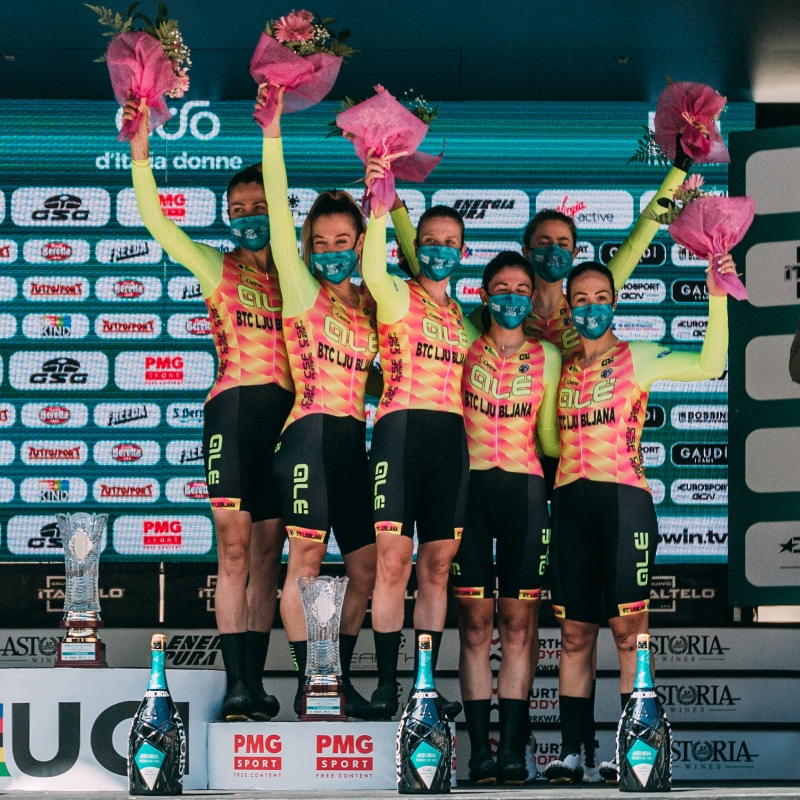 This summer, we were treated to outstanding results of the Italian and Slovene cycling team Alé BTC Ljubljana. The team’s cyclists were victorious in team events as well as in individual races, while the most talked about were the races at the Olympics. Four members of Alé BTC Ljubljana competed for Olympic medals in Tokyo, among them also the Slovenian cyclist Eugenia Bujak. The biggest success story was written by the Swiss Marlen Reusser who won the silver medal in the time trial event.

Even though most of the attention of the cycling world was given to the Olympic events, the Alé BTC Ljubljana cyclists achieved outstanding results also in other summer races. They started July by ranking third as a team in a time trial first stage of women’s race Giro d’Italia. In the general classification of women’s Giro – regarded as one of the most important races on the women’s racing calendar – two Alé BTC Ljubljana cyclists – Mavi Garcia and Tatiana Guderzo – finished in the top 10.

In the middle of August, part of the team competed in the WorldTour race in Norway – Ladies Tour of Norway, where Mavi Garcia came in third in the 3rd stage. At the same time, Marta Bastianelli placed 1st in the La Périgord Ladies and 2nd in La Picto – Charentaise (both races were in France).

At the end of August, the spotlight once again shone bright on Marlen Reusser, as she won the Simac Ladies Tour Time Trial event in the Netherlands and ranked second in the general classification. Only a few days later, she jumped on the podium again, this time in Spain, where she was first in the first stage and second in the second stage of the Ceratizit Challenge by La Vuelta – a race where in the end she finished second in the general classification. The Alé BTC Ljubljana team is currently ranked 5th in the UCI rankings.

Alé BTC Ljubljana was established as two teams – Alé Cipollini and BTC City Ljubljana – were joined. Their first season was in 2020 and although this is still a young team, it combines excellent and experienced cyclists who are no strangers to the biggest cycling races, in which they have on many occasions proved that they belong to the top class of women’s cycling. They prove this also as members of the Alé BTC Ljubljana team, which in its second season has been putting in outstanding results, thereby exciting its fans as well as its loyal supporters.