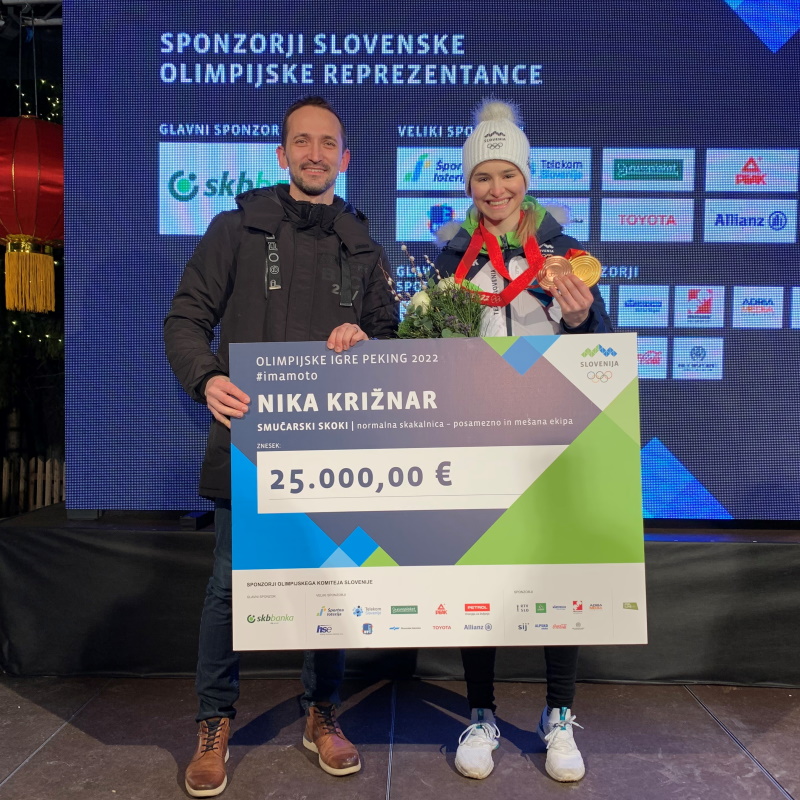 21-year-old Slovenian ski jumper Nika Križnar won the bronze medal in the individual normal hill competition and the gold medal in the mixed team event along with Urša Bogataj, Peter Prevc and Timi Zajc at this year’s Winter Olympic Games. Nika is an amazing athlete who in last year’s season stood on the podium on numerous occasions and won the World Cup crystal globe at the end of the season; this season, she has once again proven her top form and won the home competition. At the premiere FIS Silvester Tournament in Ljubno ob Savinji, she came in first on the first day of the competition in the individual event.

We are well aware of the long journey that was needed for women’s ski jumping to achieve the wanted breakthrough. We are proud that our girls, who already shined at the events in Ljubno ob Savinji, also reached for the stars at the Olympics and wrote a new page in the history of the Slovenian sport and the world history of women’s ski jumping.

All the results by the Slovenian Olympians are undoubtedly a result of unwavering motivation, perseverance and long-time trainings. Today, as a token of gratitude and an expression of support, members of the women’s ski jumping team and snowboarders were celebrated at a reception in Kranjska Gora, organised by the Olympic Committee of Slovenia. At the reception, Sašo Bertoncelj, expert associate for sponsorships and donations at the BTC Company, awarded Nika Križnar with the Olympic Committee of Slovenia award for the two medals won at the Olympics.

The BTC Company is a big supporter of sport, sport clubs, exceptional athletes and their sporting stories. We are proud to have helped in the breakthrough of women’s energy in ski jumping and to have been a piece of the mosaic in the women’s ski jumping fairy-tale as a supporter of FIS Ladies World Cup in Ljubno ob Savinji. This year, this fairy-tale catapulted our girls all the way to the top of Olympus. As a big sponsor of the Olympic Committee of Slovenia, we contribute to the promotion of the Olympic spirit and stand by the top Slovenian athletes who achieve top results on a world scale.