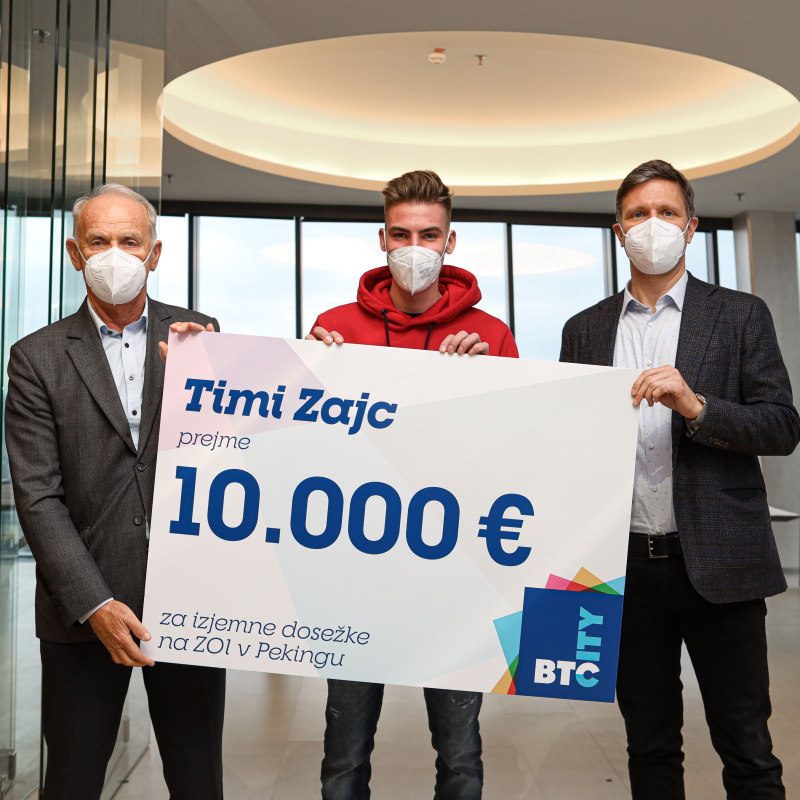 In BTC City Ljubljana, representatives of the BTC Company and Slovenian ski jumping welcomed our outstanding Olympian – ski jumper Timi Zajc, who wrote Slovenian sporting history with his excellent performances at the Winter Olympics in Beijing. At the event, he received a financial award from his proud sponsor, the BTC Company.

Timi Zajc returned from this year’s Winter Olympic Games in Beijing with excellent results. Together with Urša Bogataj, Nika Križnar and Peter Prevc, he won the gold medal in the Mixed Team event. He also placed 9th in the Normal Hill event and 6th in the Large Hill event, and to conclude the ski jumping fairy-tale, the team of Timi Zajc, Peter Prevc, Cene Prevc and Lovro Kos won the silver medal in the Men’s Team event.

As a sponsor, the BTC Company is supporting Timi Zajc for already the fifth year in a row and is proud of his journey, which led him to these Olympic medals. For his accomplishments at the Olympics in Beijing, Timi also received a financial award, handed to him by Damjan Kralj, M. Sc., Chief Executive Officer at BTC.

“For years, the BTC Company has been supporting individual athletes, from juniors to elite professionals whose success stories have gained international recognition. We believe that by investing in the development of Slovenian sport, we contribute to giving back to the society and help create success stories. We share a special bond with ski jumping. By supporting it, we’ve helped bring women’s ski jumping from Ljubno to Beijing, and we are also a long-standing supporter of Ski jumping club SSK Ljubno BTC, where future generations of ski jumpers are moulded into champions. We are also the personal sponsor of Timi Zajc, who has brought us joy on numerous occasions already, also by winning two medals at this year’s Olympics. We are well aware that hidden behind the Olympic spotlight is a lot of unwavering perseverance, hard work and courage, which is why we are extremely proud of Timi and are looking forward to his future success and even more long jumps,” said Damjan Kralj, M. Sc., Chief Executive Officer at BTC.

“With our achievements at the Winter Olympic Games in Beijing, Slovenian athletes have once again shown that we’re outstanding athletes who are able to go beyond our limits and reach for top results. I’m happy to see my supporters being proud of me and I’m happy that I was able to justify their trust in me. I’m especially grateful for the long-standing support of the BTC Company, who has been supporting me and cheering me on for five years, which gives me additional motivation,” said Timi Zajc at the reception.

Besides Damjan Kralj, M. Sc., Chief Executive Officer at BTC, the other representatives of the BTC Company present at the reception were also Jože Mermal, Chairman of the Board of Directors, Miha Mermal, Chief Marketing Officer and Chief Sustainability Officer at BTC, and Sašo Bertoncelj, expert sponsorship and donorship associate. Present at the reception were also Franjo Naraločnik, Mayor of the Municipality of Ljubno, Rajko Pintar, President of the Organising Committee of FIS Ladies World Cup Ljubno ob Savinji, and Alojz Murko, President of SSK Ljubno BTC.

Next year will mark three decades of the BTC Company being a loyal supporter of SSK Ljubno BTC, which raises and inspires future generations of male and female ski jumpers and whose member is also Timi Zajc. For eleven years, the BTC Company has also been a loyal supporter of women’s ski jumping and the general sponsor of FIS Ladies World Cup in Ljubno, inviting other sponsors and business partners to support this project. The BTC Company is also a big sponsor of the Olympic Committee of Slovenia and a supporter of the Olympic movement. Support of Olympism and of various sporting disciplines and individuals is part of the company’s social responsibility commitments. With its support of Slovenian athletes, the company wants to contribute to raising awareness about the importance of recreational sports and an active lifestyle, as well as to strengthening the overall sporting culture in Slovenia.