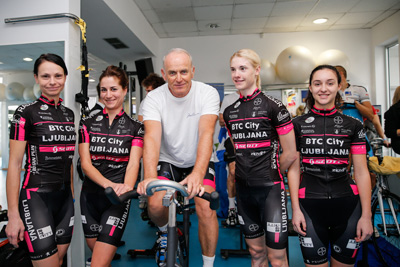 
On Friday and Saturday, 23rd and 24th January, sports centre Millenium hosted the already 10th traditional
24-hour
cycling event. Marko Baloh, one of the best ultra-cyclists in the world,
was joined by more than 100 recreational and professional cyclists. The
10 th charity cycling event took place with the
support of BTC and in cooperation with sports centre Millenium. The
visitors to sports centre
Millenium have collected more than 500 kg of food with an
extended expiration date in support of the charity organisation Anina
zvezdica.

This years cycling event, at which the participants have collected food with an extended expiration date, was described by Marko Baloh,
the man behind the idea and the entire event, as successful.
Contemplating the spirit of cycling, which graced sports centre
Millenium over the past
weekend, he stated: ?Personally, I really enjoyed seeing so many
committed cyclists pedalling for a good cause. It pleases me to see the
growing interest
in this event from year to year, and that the event hasn?t received
praise only from my fellow cyclists, some of whom have accompanied me
for many years
now, but also from the growing number of visitors, athletes and
other celebrities. This testifies to the positive impact of the
traditional cycling event
and also proves that we can all cycle together on our various paths
towards social change, and through sports activities give additional
hope that changes
might be attained.?

The participants have collected more than 500 kg of food with an
extended expiration date, which will be given to those in need under the
sponsorship of
the humanitarian organisation Anina zvezdica. Ana Lukner,
representative of the Centre for people in social distress, said: ?In
the name
of all those people who need help, I would like to thank all the
cyclists and all those who donated food as part of this traditional
charity event. The big
turnout shows great compassion for those in need and, sadly, it also
shows that the social distress of many people in Slovenia is still a
big issue.?

The BTC Company is a long-term sponsor of Marko Baloh, and in the
scope of its socially responsible activities also an active patron of
cycling in
Slovenia. Among other things, the BTC Company also supports the
development of sustainable urban mobility in Ljubljana and is an
important factor in
raising awareness on childrens safety in traffic. Last year, the BTC
Company helped organize the 33rd Marathon Franja BTC City
and the UWCT
Final 2014 Amateur Road World Championships. The company is also a
proud co-founder and sponsor of the first Slovene women?s cycling team
with a
professional license ? BTC City Ljubljana.