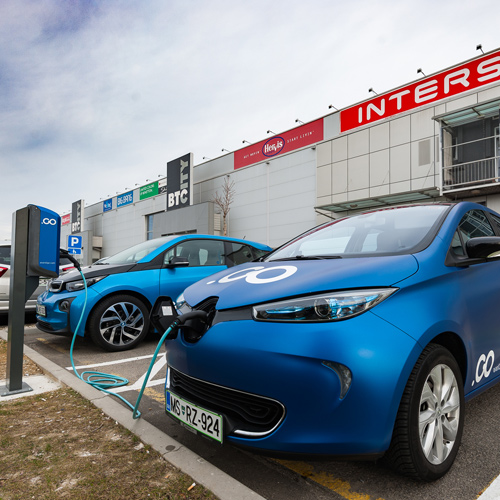 In 2016, when BTC City Ljubljana became home to four stops for electric car sharing, the BTC Company and the Avant car Company expanded their network of stops in the system Avant2Go also to BTC City Murska Sobota. At the new stop, located in the parking lot of BTC City Murska Sobota, visitors can pick up and return BMW i3, Renault Zoe, Smart ED and Nissan Lead electric cars as part of the car sharing system.

Mitja Horvat, Director of BTC City Murska Sobota business unit, explains: “With the new stop for electric car sharing we improved the accessibility to BTC City Murska Sobota and its integration in the local environment. At the same time we are improving the experience of our visitors and setting a new example in modern sustainable mobility in cooperation with the Avant car Company.”

Electric mobility represents one of the key opportunities for transition towards lower carbon dioxide emission. The co-use of electric vehicles additionally reduces the level of harmful emissions into the environment, reduces traffic density, and contributes to cleaner air. By setting up Avant2Go car sharing stops, the BTC Company has made a step towards encouraging sustainable mobility among visitors to all three BTC Cities. Within the scope of their strategic partnership, the BTC Company and the Avant car Company continue developing solutions in the field of sustainable mobility for smart cities. With the promotion of innovative green technologies, the BTC Company puts into effect its social responsibility and sustainable growth, benefiting not only current but also all future generations.