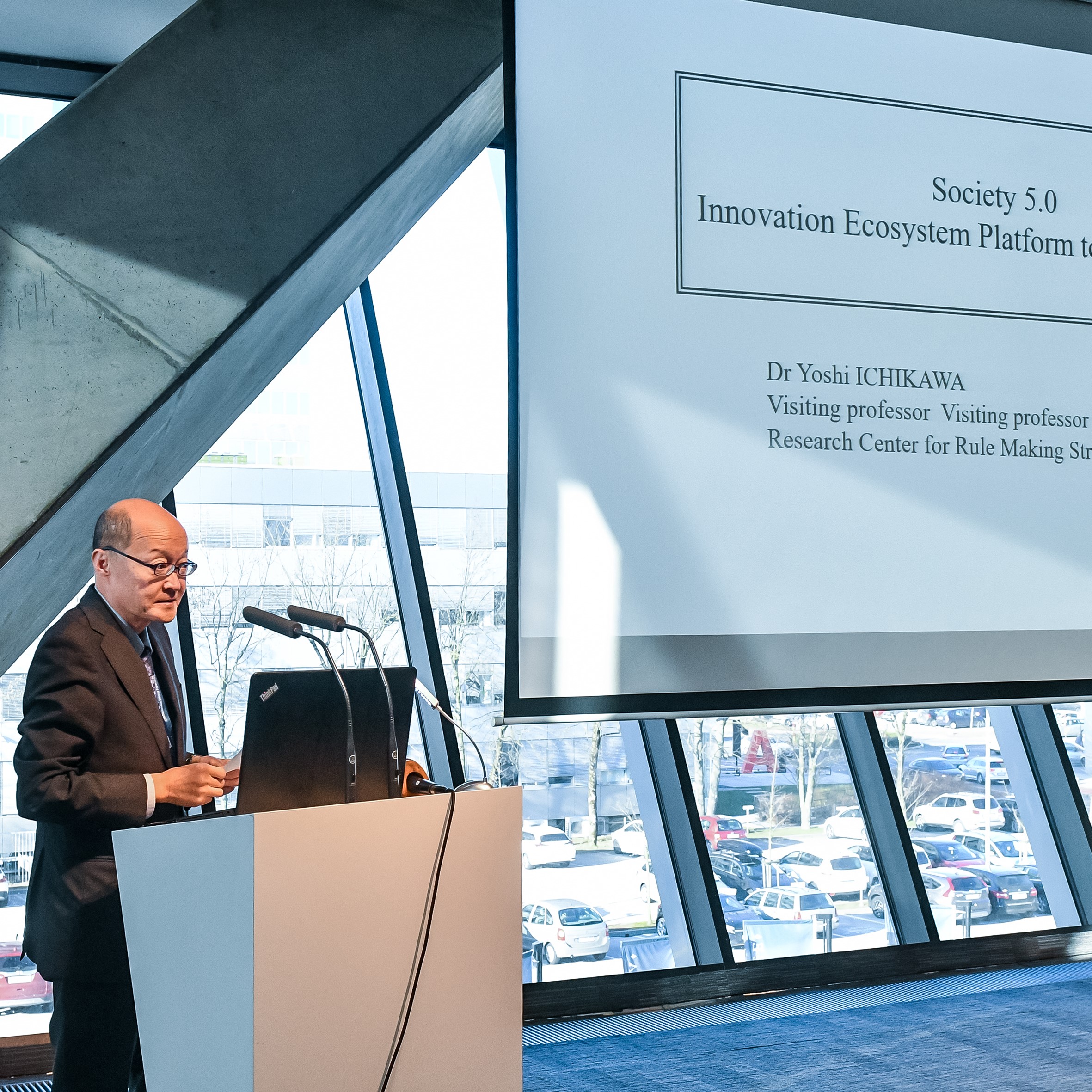 The Japanese development initiative Society 5.0, whose goal it is to foster harmonious coexistence between the virtual and the real world, balance economic development, address societal issues and create a better, super-smart and more comfortable society with people at the forefront, was presented at the 5th Forum: Society 5.0, which took place in BTC City Ljubljana’s Crystal Palace. Only a couple of months went by from the beginning of the initiative until the first implementation steps aided by ELES, the Slovenia-Japan Business Council (SJPS) and BTC which has also been recognised by the Government of Japan.

A huge source of inspiration for our participation in Society 5.0 was Dr Yoshiaki Ichikawa, visiting professor at Tama University in Tokyo, Japan, an expert on advanced technologies and standardisation and senior chief engineer at Hitachi Ltd., who had the following to say at the 5th Forum: Society 5.0: “I think that, in Slovenia, BTC City is a great place, kind of like a pilot testing field for anything new, so I very much expect that BTC will be a leader in the implementation of Society 5.0.” By participating in the Japanese development initiative, we are not only building economic development bridges between Slovenia and Japan, but also laying the foundations for a smart future, in which technology will enrich and simplify people’s lives, ensuring a high quality of life and its sustainability.

BTC’s commitment to technological development and transformation is reflected primarily in the company’s introduction of new technologies into its own business processes, its management of the unique ecosystem BTC City Living Lab, and an innovative environment with the newly founded BTC Innovation Center at its heart. With its diversified physical and digital infrastructure, a developmentally-oriented mindset and a clear strategy, BTC provides its partners with a genuine and tangible research and development site for testing new advanced technologies from the fields of logistics, smart grids, commerce, robotics and mobility, and, most importantly, investigating their interaction and coexistence with people.

Together with its business partners, BTC directly and indirectly co-operates with numerous Japanese companies which, in the spirit of the development initiative Society 5.0, strive toward the development of new and people-focused technologies. BTC has partnered with Hitachi and ELES in the smart grid project NEDO, through its affiliate AV Living Lab and alongside Toyota it has established a new car-sharing platform, and through its strategic partnership with RoboticsX, which proudly lists the Japanese company Yaskawa as one of its biggest business partners, it has brought robotics and the development of robotisation closer to end-users, business partners, and society at large. In BTC City, RoboticsX has its showroom, as well as a research and development centre, where they plan to develop smart robots and solutions for advanced industrial automation, which positions BTC among the most progressive companies in the broader region.

Besides linking the above-mentioned strategic projects in the scope of the business unit Business Innovation and Digitalization and the unit Mission: Green, BTC is also developing its own socially responsible digital projects, which essentially combine exactly what the Japanese development initiative Society 5.0 addresses.

Projects such as the BTC Simbioza Lab (the inclusion of seniors and the elderly population in a digital society), BTC Campus (the inclusion of young unemployed people in an entrepreneurial ecosystem), the BTC City Market (which combines the virtual and the real world in the field of broader consumption) and the BTC Innovation Centre (joining advanced tech companies under one roof), whose goal is progress and the implementation of people-focused technological development, products and services, represent ways of integrating the concepts of Society 5.0 into a broader local and international social environment.

Invited by the Slovenian Minister of Foreign Affairs Dr Miro Cerar, Slovenia was visited by the Japanese Minister of Foreign Affairs Tarō Kōno in August 2019, who, besides exchanging opinions on important bilateral, global and security issues, as well as the future of the EU, also spoke on the matter of Society 5.0 and the advancement of this extremely complex idea. He stated that “both Japan and Slovenia face questions that concern developed societies”, adding that Japan stands behind Society 5.0, which “strives toward an active implementation of artificial intelligence and the internet of things while transcending social challenges, such as a lower birth rate and the aging of the population, as well as ensuring economic development.”

In Slovenia, two great supporters of Society 5.0 are ELES and BTC, which together with the Slovenia-Japan Business Council and other governmental and non-governmental organisations and companies endeavour to develop smart technological and scientific solutions, contributing to the prosperity of humankind. These endeavours were also noticed by the Japanese government, which proves that vision, hard work, and above all a sustainable and future-oriented mindset can move the boundaries of the visible and the invisible.

“Japan is very appreciative of the fact that numerous stakeholders in Slovenia, especially the Government, the University of Ljubljana, and BTC, share our views of Society 5.0” emphasised the Japanese Minister of Foreign Affairs and the Head of Japanese Diplomacy Tarō Kōno upon his visit.

Participation of BTC in the Japanese development initiative Society 5.0