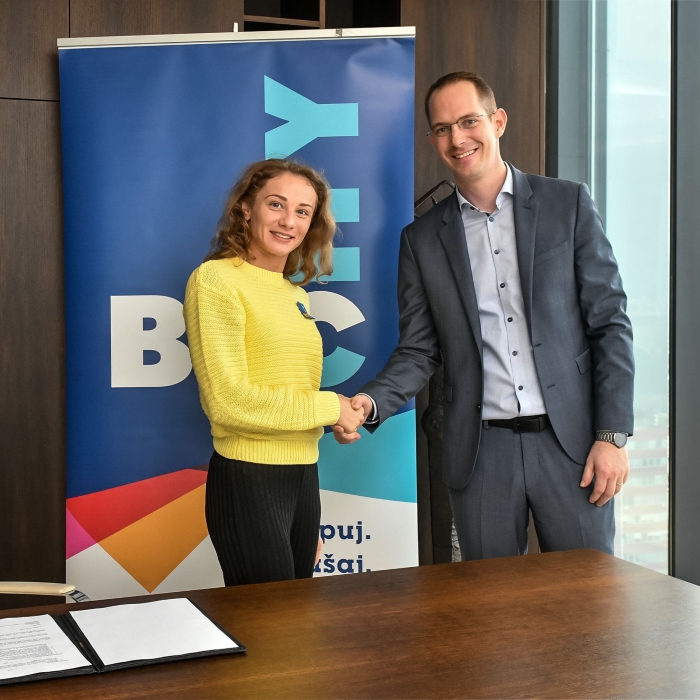 Today , BTC signed its annual sponsorship agreements with nine members of the Slovenian Gymnastics Federation. The company’s support enables the athletes to train unimpeded and participate in the most prominent international competitions while being a part of BTC’s continuous efforts to strengthen and promote the sport, and to encourage a healthy and active lifestyle.

The sponsorship represents additional support and motivation for the successful gymnasts of the Slovenian Gymnastics Federation, who can aim for new heights this year with the help of BTC. With these signings, BTC is continuing its more than 20-year-long support of Slovenian gymnastics. Sponsorship agreements have been signed with four male athletes – Alen Dimic, Luka Terbovšek, Rok Klavora, and Sašo Bertoncelj – and five female athletes – Aleksandra Podgoršek, Lucija Hribar, Teja Belak, Tjaša Kysselef, and rhythmic gymnast Ekaterina Vedeneeva, who is also the first in line to compete at this year’s Tokyo Olympics.

The signing of the agreements was greeted by mag. Damjan Kralj, President of the Slovenian Gymnastics Federation and Chief Executive Director at BTC, who said: “Gymnastics stands for hard work, perseverance, and discipline. It demands from the athlete to be in an exceptional physical and mental condition. Strength, elegance, and focus aimed at executing a flawless routine develop through many years of training, which can only be undertaken by the best. That is why we at BTC are particularly pleased that we have once again come to the aid our exceptional gymnasts by renewing our longstanding support of them and adding another stone to the mosaic of their success.”

The signing of the agreements was also attended by Miha Mermal, Chief Marketing and Sustainability Officer at BTC. He wished the athletes a successful season and stressed their importance for the promotion of sports: “At BTC, the care for society and the environment are at the forefront of our operation. As such, we support numerous athletes and sporting organisations, who achieve top results in competitions at the national and international levels. As longtime supporters of Slovenian gymnastics, we are proud to contribute to its advancement and its enhanced visibility. By sponsoring the sport, we are also spreading awareness of the importance of an active lifestyle, which contributes to the quality of life of all generations.”

Gymnast Sašo Bertoncelj also emphasized the importance of the company’s support: “As a ‘veteran’ in sports, I am all the more aware of BTC’s longtime support. Through sponsorships, young athletes gain validation and receive confirmation that the hard work they put into the sport has been recognized, while already established athletes can realize their yearly plans. I think I can speak for all when I say thank you for the support this year as well as all the previous years. I do believe that we will honour this trust with outstanding results in the arena.”

The gymnasts, who had some exceptional results last year, have an exciting season ahead of them. Though they have just returned from the Gymnastics World Cup in Melbourne, the female team is already preparing for the European Championships in Paris, which will take place at the end of April and the beginning of May. The next stop for both male and female gymnasts is the Ukraine city of Kyiv, which will host the European Rhythmic Gymnastics Championships in May. In late May, the gymnasts will also compete in Baku, the capital of Azerbaijan, at the European Championships in Men’s Artistic Gymnastics. Meanwhile, the battle for a ticket to the Tokyo Olympics is still ongoing, and one of the highlights of the season at home will definitely be the World Cup in Men’s and Women’s Gymnastics in Koper, which will take place from June 11 to June 14.