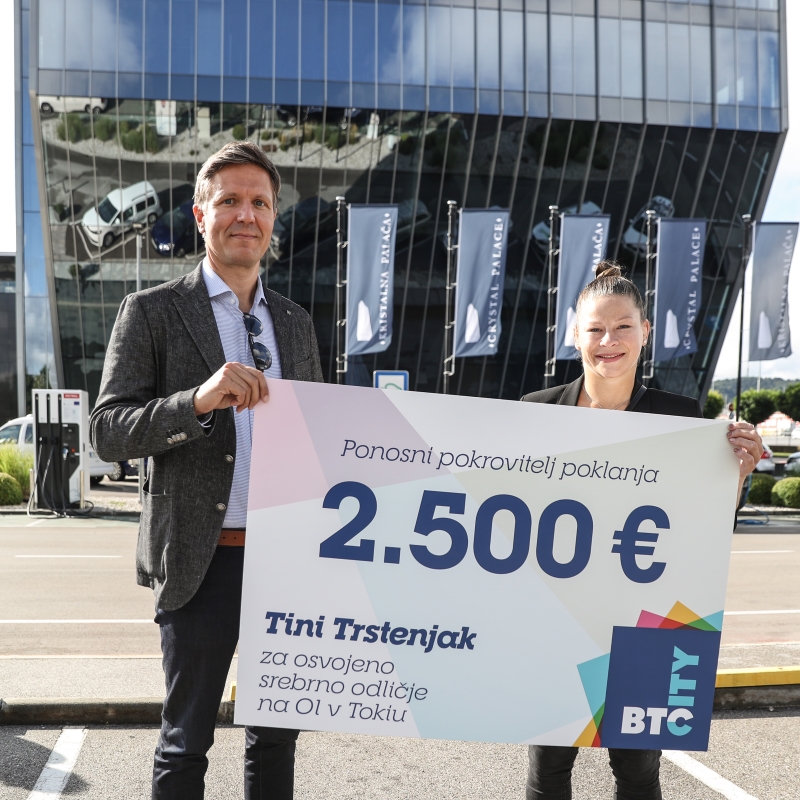 At the reception, Tina Trstenjak said: “I’m grateful for the longtime support of the BTC company, which has stood by my side for over five years. At the same time, I’m happy that I have justified their faith in me with a great performance in Tokyo. For me, this Olympic medal is the best motivation for training in the future, so I’m already looking forward to new challenges on the tatami.”

The legendary Marjan Fabjan, who is celebrating his 50th anniversary of working in judo and who achieved great success as a judoka himself, emphasized: “We’re delighted that our judo club’s Olympic collection – two gold and three bronze medals – has been enriched with another medal, this time a silver one. Every single one of these medals is incredibly valuable. Behind each and every one there is a story of perseverance, years of hard training and discipline. Without this, there can be no success. For Tina, this Olympic medal – already her second one – is more than deserved. We’re all proud of her. And of course, all this would not have been possible without the help of our sponsors, such as the BTC company.”

Representing the BTC company at the reception were Damjan Kralj, M.Sc., CEO of the BTC company, Jože Mermal, Chairman of the Board of Directors, and Miha Mermal, Chief Marketing and Sustainability Officer.

Damjan Kralj, M.Sc., CEO of the BTC company, celebrated the Olympic success of Tina Trstenjak and Marjan Fabjan, by saying: “For many years now, the BTC company has supported numerous athletes, including Olympians, from different disciplines and helped them develop their talents. We are proud that we have stood by Tina and her coach for so many years. In Tokyo, they both proved to be paragons of the Olympic spirit and sources of inspiration on a global level. We believe that such success is the result of unimaginable hard work and perseverance. We’ll be more than happy to keep cheering them on and supporting them in the future.”

The BTC company is also a longtime partner of the Olympic Committee of Slovenia; its support of Olympism is part of the BTC company’s efforts pertaining to social responsibility and sustainable development, in the scope of which the company is supporting numerous athletes and sporting organisations. Through its support of Slovenian athletes, the BTC company is helping to raise awareness of the importance of recreational sports and an active lifestyle, as well as strengthening the culture of sports in Slovenia.